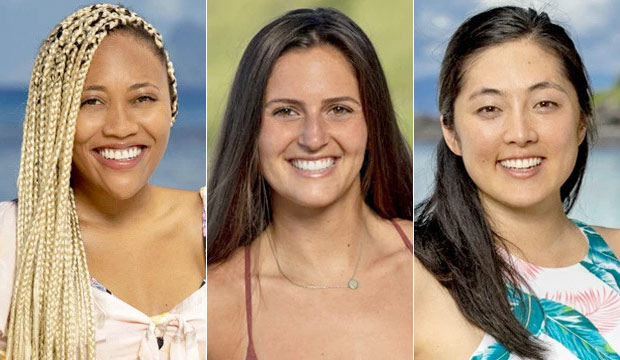 On the second episode of “Survivor” 39, one theme became very clear — the female castaways are large, in charge and not messing around. From making fire and winning  physical and mental challenges to swaying the votes of their tribe mates, the ladies have been stand-outs.

But the best move so far, according to the show’s fans, was when nanny Lauren Beck (above, left) rightfully targeted the charismatic law student Molly Byton as a threat after she swiftly wrapped two Voika males — Jamal Shipman and Jack Nichting — around her finger, earning the nickname “Parvati 2.0.” Lauren convinced two other Voika underdogs, Noura Salman and Jason Linden, to vote for Molly and others followed. As the blindsided Molly said during her exit interview, “I’m not sure exactly where I went wrong or what happened or how this tide turned. I guess I got cocky and I’ve been humbled.”

That is why 51% of “Survivor” fans chose Lauren as the No. 1 female stand-out on an episode where several women players pulled off smart moves. Coming in at No. 2 with 37% of the vote? Lairo’s Chelsea Walker (above, center), a digital content creator who damaged a few male egos when she schooled  gym owner Aaron Meredith and retired pro hockey player Tom Laidlaw on the art of using flint and a knife to create a fire. She then stumbled upon an immunity idol while gathering wood. As Chelsea rightly observed on camera, “The girls on my tribe are dominating. We can do anything they can do. In fact,we are doing it better.”

As for Kellee Kim (above, right), a Harvard alum and current Wharton MBA student, 6% admired the way she kept from being rattled when she washed up on the shores of Island of the Idols and spied the season’s members and past winners Rob Mariano and Sandra Diaz-Twine. While the edit made her seem at a disadvantage, Kellee still managed to pass a memory test and snagging an immunity idol.

SEE 42% say ‘Survivor’ mentors Rob and Sandra taught their 1st pupil a valuable lesson, but 20% say they made her feel ‘foolish’ [POLL RESULTS]

Social skills also earned praise as well. Noura took the advice of fellow outsider Jason and ceased her criticism of their fellow Voika members, earning 3% of the vote. Meanwhile, Air Force vet Missy Byrd listened patiently to Aaron’s griping  after he was left out of the loop during Voika’s tribal council, earning 3% of the vote as well.

And, on any other episode, Chelsea’s tribemate Elizabeth Beisel‘s quick work during an immunity challenge when the Olympian swimmer quickly unhitched a ladder from the floor of the ocean, giving her fellow players an early lead, would earn praise. Similarly, Lairo’s Missy and Elaine Stott showed up Jamal, beating him at a game involving placing balls into a slot and securing immunity. But both efforts went unsung in the poll.