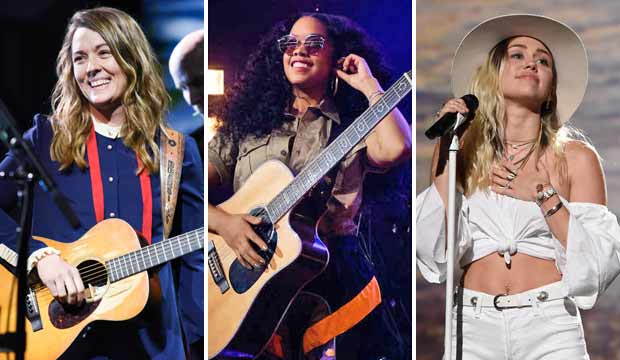 The Grammys have announced another round of presenters who will take the stage for musical performances on Sunday night, February 10, when the awards are handed out: Brandi Carlile, H.E.R., Miley Cyrus and Red Hot Chili Peppers. Who are you looking forward to the most?

Carlile took us by surprise when the nominations were announced by receiving a whopping six bids including Album of the Year for “By the Way, I Forgive You” and Record and Song of the Year for “The Joke.” She had only ever received one nomination in her career before this: Best Americana Album for “The Firewatcher’s Daughter” in 2016. This will be her first time performing at these awards.

Newcomer H.E.R. was also a surprise nominee for Album of the Year for her self-titled compilation. The singer-songwriter is also up for Best New Artist, plus a trio of awards in the R&B field. She too is a first-time performer at the Grammys.

Three-time Grammy-winning rock veterans Red Hot Chili Peppers don’t have any nominations this year, but the recording academy is hoping to create a memorable Grammys moment by having them duet with four-time Grammy nominee Post Malone.

SEEGrammy predictions for Best New Artist: Will H.E.R. be the first R&B female winner in 17 years?

Miley Cyrus has one past Grammy nom, Best Pop Album for “Bangerz” (2015). She last performed at the Grammys just last year when she dueted with Elton John on a rendition of “Tiny Dancer.”

These artists join the list of performers who had already been announced: Camila Cabello, Cardi B, Dan and Shay, the aforementioned Post Malone, Shawn Mendes, Janelle Monae, and Kacey Musgraves. The awards will be hosted by 15-time Grammy winner Alicia Keys.