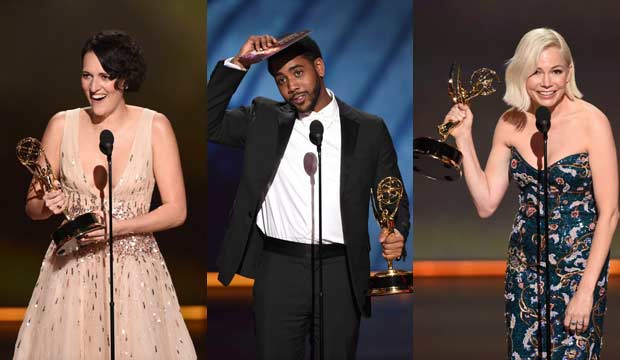 The Emmys followed in the Oscars’ footsteps this year by going without a host, the first time the Emmys has done so since 2003. Early in the telecast it was hard to tell whether the change was an improvement, and by ceremony’s end the jury was still out. Past Emmy hosts Stephen Colbert and Jimmy Kimmel joked that the lack of a host could lead to unexpected consequences, like abolishing presenters next. Whatever the future holds, it’s safe to say that this year’s ceremony proved that a hostless ceremony doesn’t necessarily equal a great ceremony.

SEE2019 Emmy winners: Full list of nominees and winners in all 27 categories

After a brief opening featuring Homer Simpson crashing through the floor of the Microsoft Theater, Anthony Anderson rushed backstage to find the perfect savior to get the show on track: Bryan Cranston. The six-time Emmy winner delivered an opening that was equal parts inspiration and comedy, beginning with the glory of the moon landing and ending with a request that “This Is Us” stop making us cry every damn week. When he closed his remarks with a comment on how “damn good” current television is, you almost had to wonder if anyone other than Cranston could get away with such a statement without seeming self-congratulatory.

It became clear early on that without a host, the sometimes painful presenter banter would be even more cringe-worthy than usual. Presenting Best Comedy Writing, Ken Jeong and Nick Cannon should have asked the category’s winner Phoebe Waller-Bridge (“Fleabag”) for a rewrite. The long and awkward bit involved making a Tik Tok video for Jeong’s daughter. Ignoring the fact that most people under the age of 20 don’t understand Tik Tok, the bit went on for far too long, with even Cannon looking confused.

SEE‘Fleabag’ dominated the comedy Emmys, but didn’t stop ‘The Marvelous Mrs. Maisel’ from making history of its own

Confusing was a good word for much of the telecast. There was a strange lack of energy during the moments when awards weren’t being presented. Farewell packages devoted to departing Emmy champs “Game of Thrones” and “Veep” were underwhelming. The “Thrones” cast was left reciting stilted platitudes punctuated by rounds of applause for individual performers. The “Veep” tribute fared slightly better thanks to the comic timing of Julia Louis-Dreyfus, Tony Hale and Timothy Simons. But come on, Emmy producers. These are two of the most honored shows in the history of these awards — couldn’t you come up with something a bit more substantial?

Then there were moments that made no sense at all. A production number starring Adam Devine intended to introduce the variety categories was such a miss that it deserves to be mentioned in the same breath as Rob Lowe‘s infamous Oscar number with a certain Disney heroine.

Thank God, then, that the winners gave us some truly memorable speeches. Alex Borstein (“The Marvelous Mrs. Maisel”) started with bawdy humor but ended with a tearful dedication to her grandmother, a Holocaust survivor. Best Movie/Mini Supporting Actress winner Patricia Arquette (“The Act”) tearfully remembered her deceased sister Alexis Arquette while calling for more support for the transgender community.

Best Movie/Mini Actress winner Michelle Williams (“Fosse/Verdon”) brought the crowd to its feet with an emotional call for pay equity, using her own experience portraying Gwen Verdon to highlight the importance of women being paid the same as their male costars.

SEE‘Game of Thrones’ ends its run with 59 Emmys: Here’s every award it won over 8 seasons

Jharrel Jerome (“When They See Us”) earned a prolonged standing ovation with his win for Best Movie/Mini Actor. But he brought the crowd to their feet again as he dedicated his award to the real life Central Park Five, whom Jerome referred to as “the Exonerated Five,” and who were in attendance at the ceremony. Jerome’s youthful exuberance was infectious, and the entire audience was right there with him as he raised his arms in victory.

And then there was Billy Porter‘s history-making win for Best Drama Actor, a first for an out gay black leading man. The “Pose” star joyfully strutted his way on stage in platform heels, a crystal drenched suit, and a hat so fabulous that it deserved a prize all its own. His speech was tinged with joy, victory and triumph as he quoted James Baldwin: “It took many years of vomiting up all the filth I’d been taught about myself, and half-believed, before I was able to walk on the Earth as though I had a right to be here,” Porter exclaimed.