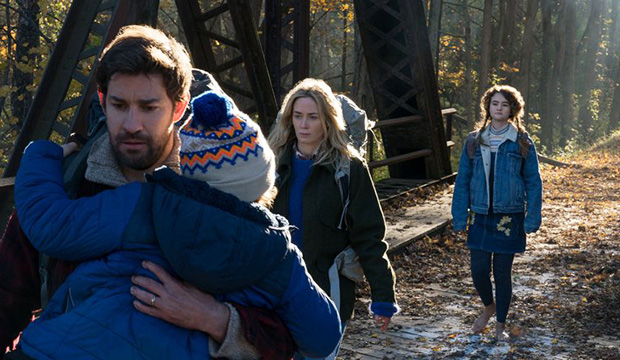 When Krasinski first read the spec script he “was holding a three-week-old girl reading about what you would do to protect your kids. Those early days of parenthood are genuinely terrifying. You are checking if they are still alive; you are actually checking their breathing. As soon as I finished the script I had this vision of what I wanted for the movie … I wanted it to be, as weird as it sounds when you look at the poster, a love letter to my kids.” The actor-turned-filmmaker received Writers Guild and Critics’ Choice bids for screenwriting alongside Woods and Beck, and the film won the Critics’ Choice prize for Best Sci-Fi/Horror Film.

The film gave Krasinski an opportunity to work with his real-life wife, Blunt, who plays his spouse onscreen as well. “It’s so personal to both of us,” she says, “so people are very moved by it and surprised by it. People who hate horror love the movie.” She picked up a SAG nomination for her performance in the supporting category, and next she may pull off rare double Oscar nominations since she’s also up for consideration for her lead role in “Mary Poppins Returns.”

“Our intent is first and foremost just telling a story about broken communication in a family; that’s the centerpiece,” explains Beck, echoing Krasinski and Blunt about the film’s intimate focus. “Everybody sees their own experiences with family in the film and that’s perhaps why it connected so widely.”

SEE Shh! ‘A Quiet Place’ will sneak into Best Picture Oscar lineup, according to some of our top predictors

Woods believes the horror genre “has always had a lot to say and a lot to reflect about where we are as a society. So those movies are so, so important and also … stylistically pushing boundaries and doing really inventive things.”

The film has connected well with critics and audiences, and now with industry groups too as evidenced by Fuller and Form’s Producers Guild nomination for Best Picture. But undertaking the film in the first place “was a big risk,” Fuller admits. “It was such a narrow bull’s-eye to execute and make compelling. A lot of the tools that we have relied on in the past we could not use … But 10 minutes into the movie people stop eating. I’ve never experienced such quietness in the theater, and such awareness of the quiet in the theater. It’s a different experience.”

Form adds that the 67-page spec script “was so light I thought it was a television pilot. But as you start leafing through it you realize there is no dialogue. When you get the call that something original is coming in, you’re definitely fired up for it. And more than anything we’ve ever read, this felt like a theatrical experience.”

Because of the film’s premise and limited dialogue, the use of sound was especially important. Its sound editors Aadahl and Van der Ryn certainly had a strong track record coming into this project. They were Oscar nominees together for their work on “Transformers: Dark of the Moon” and “Argo.” Before that Van der Ryn won Best Sound Editing for “The Lord of the Rings: The Two Towers” and “King Kong” and was nominated once more for “Transformers.”

Hailing from Denmark, cinematographer Christensen is best known for shooting “Far From the Madding Crowd,” “Fences” and “Molly’s Game.”