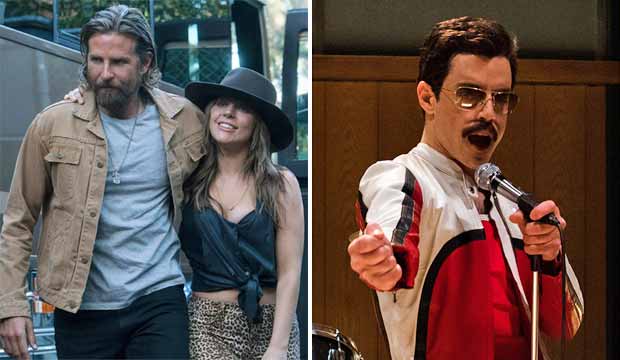 It’ll be deja vu all over again at the 2019 Billboard Music Awards as recent Oscar rivals for Best Picture “A Star is Born” and “Bohemian Rhapsody” go head to head in the race for Top Soundtrack. Luckily for those two music-filled dramas, Oscar usurper “Green Book” didn’t make a big splash on the music charts, so it can’t snatch another prize away from them. Who do you think is out front to win? Make or update your predictions here to let us know

These awards are based on Billboard chart metrics like album sales, track sales, online streaming performance and radio airplay, and as of this writing “A Star is Born” is the favorite to win based on the combined predictions of hundreds of Gold Derby users. It gets leading odds of 16/5 with unanimous support from our Editors and the majority of our Top 24 Users who got the highest scores predicting last year’s Billboard winners.

“A Star is Born” wasn’t just a box office hit, it also reached number-one on the Billboard 200 albums chart and has gone platinum. Its lead single, the Oscar-winning “Shallow” performed by Lady Gaga and Bradley Cooper, also peaked at number-one on the Billboard Hot 100 singles chart. And the soundtrack helped earn Gaga three other nominations this year: Top Song Sales Artist by herself, Top Selling Song with Cooper for “Shallow,” and the Chart Achievement Award with Cooper.

But “Bohemian Rhapsody” was also a Billboard hit. It peaked at number-two, and it has been certified gold. The soundtrack is essentially a greatest-hits compilation for the legendary British band Queen, who also earned a nomination this year for Top Rock Artist as a result of the soundtrack’s success. So it currently ranks second in our predictions with 39/10 odds, but don’t count it out. A couple of our Top 24 Users think it will upset “A Star is Born.” Who do you think will take the prize?