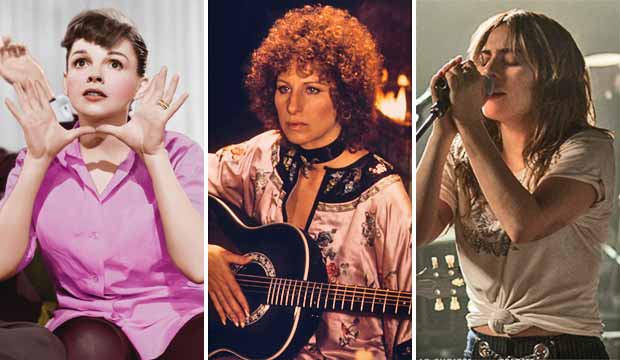 Bradley Cooper‘s remake of “A Star is Born” underperformed at Sunday’s Golden Globes winning just one of its five races: Lady Gaga shared in the prize for Best Original Song (“Shallow”). Could these shocking losses be a sign of things to come at the Oscars? Is there a curse on this classic tale of Hollywood?

Let’s take a look back at the results of how each of the first three versions of “A Star is Born” fared at the Academy Awards. Between them, they reaped 17 nominations but won just two. The original 1937 edition claimed the screenplay award while the 1976 musical remake won Best Original Song (“Evergreen”) for its star, Barbra Streisand. She was the first female composer to win this Oscar; Lady Gaga would be the 11th.

1937 version
This was a straight drama and was a loose retelling of the 1932 flick “What Price Hollywood.” It starred two Oscar winners — Fredric March and Janet Gaynor — as fading matinee idol Norman Maine and newcomer Esther Blodgett. It reaped seven Oscar nominations but was lucky enough to win just one: Best Original Story. Here is what bested it in the other six races:

1954 version
Judy Garland had played the part of Esther in a radio version of the film and her then husband, Sid Luft, conceived of the idea of making it into a musical with James Mason as her co-star. George Cukor, who had helmed “What Price Hollywood,” directed this epic edition, which ran over three hours before studio head Jack Warner cut it by more than 30 minutes after it underwhelmed in its roadshow engagements. The film earned six Oscar nominations but was shut out at the awards. Garland, who had been let go by long-time studio MGM in 1950, was considered a lock for Best Actress but lost to Grace Kelly (“The Country Girl”). As wag Groucho Marx observed, “It was the biggest robbery since Brinks.” Here are the results of the other five races:

Best Actor – Mason lost to Marlon Brando (“On the Waterfront”)
Best Art Direction (Color) – lost to “20,000 Leagues Under the Sea”
Best Costume Design (Color) – lost to “Gate of Hell”
Best Original Song – “The Man That Got Away” lost to “Three Coins in the Fountain” from the film of the same name
Best Score – lost to “Seven Brides for Seven Brothers”

1976 version
Streisand and her then boyfriend Jon Peters updated the story and moved it to the world of music. She was the newly christened Esther Hoffman while Kris Kristofferson played fading rock star John Norman Howard. While the film won a whopping five Golden Globes, including Best Comedy/Musical and for its leads, the academy snubbed it in all the top races. It had to make do with four nominations, with Streisand and lyricist Paul Williams the only winners.