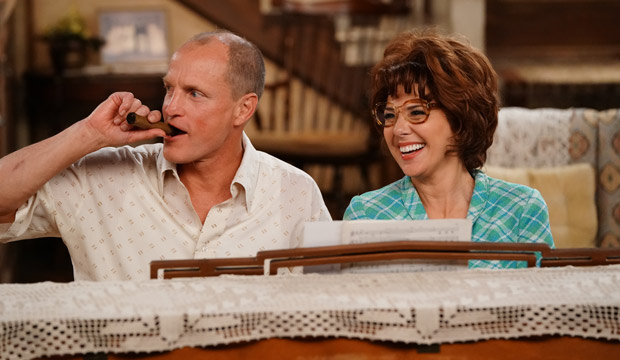 Did you watch ABC’s live re-creations of the classic sitcoms “All in the Family” and “The Jeffersons”? If you did, you weren’t alone. From 8 to 9:30 p.m. ET, the network’s star-studded reboot of beloved Norman Lear-created sitcoms in real time averaged 10.36 million viewers and 1.7 demo rating, beating the rest of the prime-time competition. That marks a six-month high for ABC in the 90-minute Wednesday night time period.

Part of the draw of late-night host Jimmy Kimmel‘s brainchild were the stars involved, with Woody Harrelson as Archie Bunker, Marisa Tomei as wife Edith, and Jamie Foxx and Wanda Sykes as George and Louise Jefferson.  Old scripts were used in their original format, including Archie’s non-PC slurs. Foxx did flub a line and broke character — but that is what happens sometimes when you are working without a net. Also on board was Will Ferrell and Kerry Washington as interracial married couple Tom and Helen Willis.

The audience went wild when Marla Gibbs reprised her role as sassy maid Florence Johnston. Another treat: Jennifer Hudson belting out “The Jeffersons’ ” theme song, “Movin’ On Up.”

Obviously, there likely will be more such live specials given the healthy viewership. But which other classic sitcoms should be on the list? One might wish they had chosen a less unwieldy title for the special. “Live in Front of a Studio Audience: Norman Lear’s “All in the Family” and “The Jeffersons” is more than a mouthful.

SEETV Hall of Fame: Who should be the next inductee?

Sure, it would be great to see such other Lear-produced classics like “Maude,” “Sanford and Son,” “Good Times” and, my fave, “Mary Hartman, Mary Hartman” done in a live format. But what about other classic comedy series. Take the poll below or use the comment section to suggest other off-the-air favorite sitcoms that could work in tandem and deserve to get this type of revival.