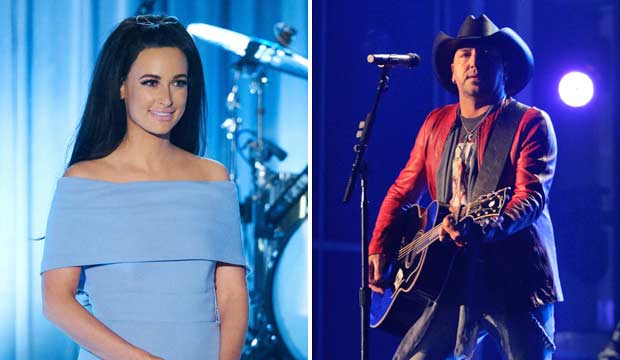 Kacey Musgraves will win all five of her Academy of Country Music Awards nominations when prizes are handed out on Sunday night, April 7. That’s according to the combined predictions of hundreds of Gold Derby users. But Musgraves was locked out of the top category, Entertainer of the Year, which is dominated entirely by men for the second year in a row. We think that award will go to Jason Aldean for the fourth time. Scroll down for our full list of predictions by category, with the nominees listed in order of their racetrack odds. Projected winners are highlighted in gold.

Musgraves recently achieved a clean sweep at the Grammys, going four-for-four including Album of the Year for “Golden Hour,” which was only the fifth country album ever to take that prize. Now we think she’ll win Album of the Year from the ACMs, which would bring her two awards as both artist and producer. She also leads our predictions for Song of the Year for “Space Cowboy,” for which she would also be honored twice, as both artist and songwriter. Her last projected win is Female Artist of the Year, where she would dethrone Miranda Lambert after a record-setting nine consecutive victories.

No one is expected to come close to Musgraves haul on Sunday night, not even Aldean. In fact, the only other artists predicted to win multiple prizes are the duo Dan and Shay. They’re tipped to win two awards: Duo of the Year and Single of the Year for “Tequila,” which recently won them their very first Grammy for Best Country Duo/Group Performance.

SEEWill Keith Urban FINALLY win Entertainer of the Year at ACM Awards on his 9th try?