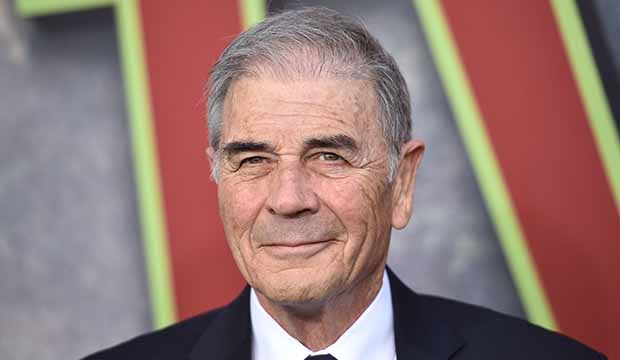 Actor Robert Forster‘s first film, 1967’s “Reflections in a Golden Eye,” starred Elizabeth Taylor and Marlon Brando, who already were Hollywood legends. But he managed to make a splash on screen in the John Huston-directed dark-themed drama set in a 1940s U.S. Army post by playing a kinky soldier who enjoyed racing through the woods stark naked on top of a black stallion.

His final film, which opened on October 11  — the day he was dead from brain cancer at 78 — was “El Camino,” a spin-off of AMC’s crime series “Breaking Bad” released by Netflix, in which he reprised his role as Ed, a vacuum cleaner repairman who works undercover as a new identity expert who assists Bryan Cranston‘s Walter White. Cranston, who first met Forster when he worked as a special effects assistant on “Alligator” was among the many who paid tribute to his co-star:

I’m saddened today by the news that Robert Forster has passed away. A lovely man and a consummate actor. I met him on the movie Alligator (pic) 40 years ago, and then again on BB. I never forgot how kind and generous he was to a young kid just starting out in Hollywood. RIP Bob. pic.twitter.com/HtunD0Fx6g

In between those career bookends were roles in more than 100 films — and nearly as many TV shows —  an astonishing eclectic array of titles.  They include the likes of Disney’s 1979 pricey space opera bomb “The Black Hole” and 1980’s “Alligator,” a satire of B-movies written by John Sayles in which a reptile that is flushed down a toilet becomes a monstrous predator, to such mainstream comic fare as 2000’s “Me, Myself & Irene” by the Farrelly brothers and Best Picture Oscar bait like Alexander Payne‘s  “The Descendents” from 2011.

SEEIn Memoriam: Stars and celebs we have lost in 2019

But two movies, one that helped launch his career and the other that served as a comeback vehicle, put Forster on Hollywood’s radar early on and then helped to put him back there. The first was 1969’s “Medium Cool,” shot in cinema-verite documentary style with elements of fiction and non-fiction by director, writer and cinematographer Haskell Wexler.

It stars Forster as a cynical TV newsman who shoots footage of car accidents without aiding those hurt in the crashes. His attitude changes when he learns his station has been providing news footage to the FBI. He finds a freelance job covering the Democratic National Convention in Chicago and meets a single mother and her son whose father is in Vietnam. There are scenes of riots breaking out and police brutality. “Medium Cool” captures the political divisions in the United States and the mood of the counterculture era while helping birth — along with “Easy Rider” that same year — the New Hollywood movement of filmmaking. It also earned an X-rating for language and a lusty romp featuring full-frontal nudity.

But the movie that revived Forster’s own cool and saved him from doing more B-grade action films and straight-to-video movies was Quentin Tarantino‘s 1997 tribute to ’70s blaxploitation films, “Jackie Brown,” starring one of the queens of genre — Foxy Brown, Coffy and Sheba, Baby herself aka the alluring Pam Grier. At the center of this crime flick is the middle-age romantic sparks that fly between Grier’s Jackie, a flight attendant who is put in jail when she is caught smuggling money and an unexpected stash of cocaine for an illegal arms dealer, and Forster’s gentlemanly bail bondsman Max Cherry.

Perhaps their soulful performances are the reason that this is Tarantino’s least-violent effort — only nine bullets are shot. There’s a great scene when Max visits his client at her apartment and Jackie plays a LP by The Delfonics, specifically the song “Didn’t I (Blow Your Mind This Time).” At the film’s conclusion, they share a meaningful kiss goodbye after Jackie plans to take her ill-gotten gains and chill out in Madrid.  She invites him to join her, but a phone call interrupts him and she drives away.

Both Forster and Grier hadn’t had a lead role in ages and he didn’t even have an agent when Tarantino handed him the script in a restaurant and said, “You’re going to do this and that’s all there is to it.” Forster ended up getting the film’s lone Academy Award nomination for supporting actor.

Forster was also a force on TV when he got his own detective series set in 1930s Los Angeles, “Banon” that lasted one season in the early ’70s. While it lacked ratings, Tarantino liked his performance as the upright but tough private eye — just one reason why he pursued him for “Jackie Brown.” Forster did countless guest spots on shows such as ’80s staples as “Magnum, P.I.” and “Murder, She Wrote” as well as “Walker, Texas Ranger” in the ’90s. More recently, he had a regular role on David Lynch’s 2017 version of “Twin Peaks” as Sheriff Frank Truman, the brother of the original show’s Sheriff Harry S. Truman, since actor Michael Ontkean turned down the chance to return to the part. He also played Tim Allen‘s father on the sitcom “Last Man Standing.”

If you are aching for a Robert Forster acting fix, “El Camino” is streaming on Netflix right now. According to his publicist, Kathie Berlin, he has two additional films that have yet to be released.

Here are some words of wisdom from the actor, with a motto that he fully lived up to both in good times and bad: “Well, you know what? The actor still gets up in the morning, if he’s still got something to work with, you go out there and do it. Never quit!”