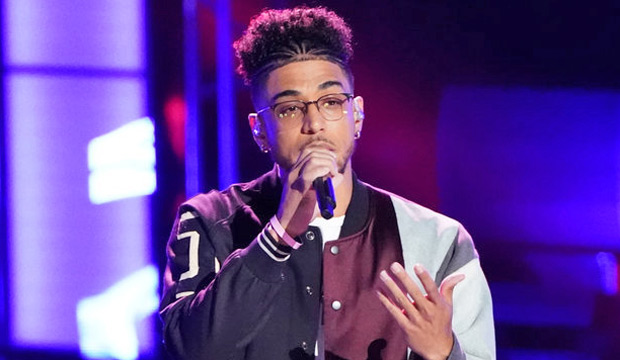 Tuesday night on “The Voice” Season 17, Kalvin Jarvis of Team Adam Levine won his live Cross Battle against fellow R&B singer Julian King of Team John Legend. As a refresher, on Monday both men had put creative twists on songs from female artists: Dua Lipa‘s “New Rules” for Kalvin and Adele‘s “Hello” for Julian. Adam ended up losing two of his remaining three artists (LB Crew and Kendra Checketts) during the results show, so Kalvin’s success kept him from experiencing a near-disaster on live television. Do YOU think America made the right choice to keep Kalvin?

“Man, Kalvin, you had such an amazing moment for yourself,” Adam said to Kalvin seconds before the big announcement was made by host Carson Daly. Adam continued on, “I can’t guarantee any results because I really frankly have no idea what happens out there. But I will tell you that you did your best job at the most important time. I think you blew us all away.”

After Kalvin was named the winner of the Cross Battle, John told Julian that he “loved” working with him. Unfortunately, just moments earlier John had used his one and only Save on Jacob Maxwell, so Julian was officially eliminated from the competition.

The previous night Adam had this to say about Kalvin’s impressive performance of “New Rules”: “Kalvin, look, I knew you were incredible already, but I thought that you went from someone who was a great singer and very much in the conversation to a front-runner. Because that performance was a front-runner’s performance. You were unreal.”

At the conclusion of the live Cross Battles, Adam only has four artists left on his team: Kalvin, Betsy Ade, Domenic Haynes and Mari. Which of these artists do you think has the best shot of joining “The Voice” winners list?