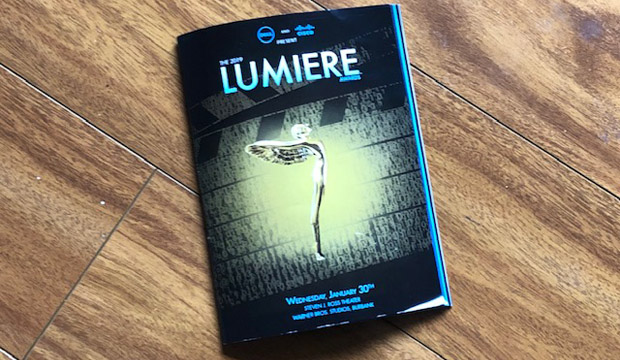 When the relatively new Lumiere Awards were bestowed in Hollywood last week by the Advanced Imaging Society to reward the best hi-tech wizardry in entertainment media, the ceremony was so slick and relevant that I couldn’t help noticing — uh, oh — it felt a bit Oscar-y and Emmy-ish. That’s ironic.

That’s because the society was founded 10 years ago to do what the film and TV academies of arts and sciences refused to do – take the sciences part of their job seriously. I wonder: Why do the Oscars have four acting categories, but no award for Best Use of HDR (High Dynamic Range) in a Film? The Lumieres have three HDR film categories (and more for TV), including one for foreign films that was just won by Oscars frontrunner “Roma.”

Alfonso Cuaron‘s intimate memoir of 1970s Mexico City may look old-fashioned, being in B&W, but he shot it with an ultra-high-definition Alexa 65 camera with Dolby Atmos sound.

“Here was one of the greatest artists of our time exploiting every opportunity he could with the new technology,” said Steve Scott, Technicolor supervising finishing artist, accepting the award. “He knew it would be a perfect chance to show details and highlights when the camera was staring straight into the sun as the foreground characters were silhouetted against it. Or to show how an intimate moment between two lovers unfolds in the deep dark of a cavernous theater.”

Many other top Oscar nominees won Lumieres, too: the HDR award for live action features went to “A Star Is Born,” “Ralph Broke the Internet” took the equivalent prize for animated flicks. Variety published the list here.

So why don’t these films win similar Oscars or Emmys for their pioneering tech achievements? I think the answer is obvious: those award groups prefer to gush over celebrities while putting on a televised awards show that will fetch the most ad bucks.

Advanced Imaging Society president Jim Chabin tried to change all that years ago when he became president of the Emmys’ Television Academy in 1999. Soon after he got the job, we grabbed dinner one very dark evening in Manhattan while he told me, with gung-ho glee, what his plans were.

“The TV academy needs to become more of a real academy,” Jim insisted. “Our job is bigger than just giving out Emmy Awards. We need to have more events for members that address the latest industry challenges – technological, financial, creative. We have to care more about the arts and sciences.”

Jim made improvements at the academy while there, but otherwise got frustrated by entrenched establishment forces.

A few years later he got the chance to help create a new industry thinktank organization from scratch that would try to do things right this time. Jim teamed up with Warner Bros., Dreamworks Animation, Imax, Pixar, Sony Pictures, Samsung and other major Hollywood media to launch the Advanced Imaging Society that promotes education and discussion of Virtual Reality, High Dynamic Range, 3D and other emerging technologies. The society now has 1,100 members and chapters in China, Japan, U.K., European Union and Canada.

The society even has, of course, its own new trophies — the Lumiere Awards, named after the French brothers (Auguste and Louis) who were trailblazers of early cinema. The Lumieres were launched eight years ago and have evolved impressively over time until ultimately this year they got a glossy makeover by veteran Hollywood super-producer Brad Bessey (“Entertainment Tonight,” “The Insider,” “The Talk,” E! Network). Brad goosed up the awards show on the Warner Bros. lot, adding elegantly styled, gold-kissed signage, lighting and staging. Brad also added more glittery names to the roster of award presenters, even ambushed the audience with a surprise appearance by Tom Cruise, who dropped by to help honor “Mission: Impossible – Fallout” director Chris McQuarrie.

The statuette that winners receive is an elegant, stylized image of Aurora, Roman goddess of dawn. She’s gorgeous and impressive. The awards ceremony host made a point of informing the audience that her statuette is coated in real gold and it’s manufacturered by R. S. Owens, the same firm that makes the Oscar and Emmy statuettes.

Hmmm. Hey, Oscar and Emmy: watch your backs. There’s a new kudo in town and she rewards disruptors.