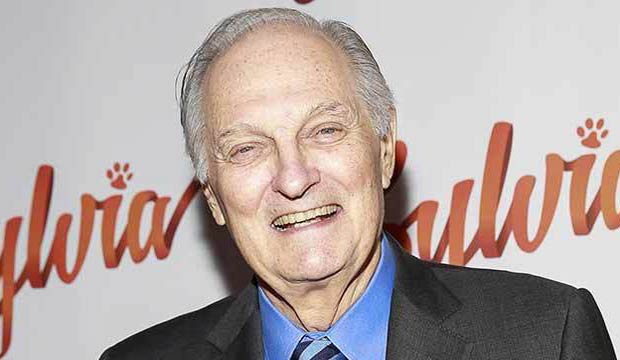 Anyone can be a multi-talent. But to be a major star with a big heart and a social conscience means even more.

Tonight at 8 p.m. ET/5 p.m. PT on TNT and TBS, Alan Alda — whose 83rd birthday is on Monday — will be honored by his thespian peers as he receives a Screen Actors Guild  life achievement award for his body of work on stage, in film and especially on TV. That includes his 11 seasons on “M*A*S*H” (1972-83), both in front of and behind the camera, along with his activism and other landmarks in his seven-decade career.

The award predates the 25-year-old  competitive awards by more than 30 years. The first recipient: Eddie Cantor in 1962. More recently, the guild has presented its honorary prize to such performers as Morgan Freeman, Lily Tomlin, Carol Burnett, Debbie Reynolds, Rita Moreno and Dick Van Dyke. Here are five reasons  why Alda is fully qualified to join such an esteemed club:

1. The TV smash that was “M*A*S*H.” If Alda only did this TV series adapted from Robert Altman’s darkly comic 1970 film,  he would  still be more than deserving of this trophy. The son of actor Robert Alda initially focused on portraying Capt. Benjamin Franklin “Hawkeye” Pierce, part of the irreverent medical team of the 4077th Mobile Army Surgical Hospital during the Korean War during the first five years when the series focused on comedy.

But Alda – who actually served in Korea as part of the U.S. Army Reserve — would take more control in the later years, producing scripts that also handled serious political issues as well as humorous situations. He would recruit actors Harry Morgan and  Mike Farrell to replace McLean Stevenson and Wayne Rogers, who both left at the end of Season 3. He also wrote 19 episodes and directed 32. Most impressively, Alda not only appeared in all 251 episodes, he wrote and directed the show’s 2-1/2-hour finale, which remains the single most-watched episode of any broadcast network TV series with 105 million viewers.

2. “The West Wing” and beyond. Instead of resting on his TV laurels,  Alda most notably joined the cast of NBC’s hit series “The West Wing” in 2004 as Arnold Vinick, a Republican senator from California and presidential nominee. The character echoed sentiments of real-life social moderates like John McCain. The role would win him a 2006 Emmy as a supporting actor in a drama series.  He also appeared in five episodes of  “ER,” as a mentor of Dr. Kerry Weaver (Laura Innes) and was in three episodes of “30 Rock” (2009-10) as the father of network exec Jack Donaghy (Alec Baldwin), earning a guest actor Emmy nomination for both.

3. An early supporter of women’s rights. The father of three daughters who will celebrate 62 years of marriage to his wife, Arlene, in March used his fame to speak out for issues he was passionate about. That includes being a dedicated supporter of women’s rights and the feminist movement. In 1976, he co-chaired with former First Lady Betty Ford onthe Equal Rights Countdown campaign. For his efforts, he was dubbed, “the quintessential Honorary Woman, a feminist icon” by The Boston Globe.

4. His movie career. Alda broke out in 1968 as a film actor when he starred in “Paper Lion,” an account of writer George Plimpton’s tryout for the NFL’s Detroit Lions. He also appeared with Ellen Burstyn in a 1978 hit adaptation of Bernard Slade’s play “Same Time, Next Year” as a couple who cheat on their spouses with a once-yearly tryst over 27 years. He has done three Woody Allen films, “Crimes and Misdemeanors,” “Manhattan Murder Mystery” and  “Everyone Says I Love You” and was Oscar-nominated for his supporting role as a bitter rival of Howard Hughes in 2004’s “The Aviator.”

But my favorite of his movies is 1981’s “The Four Seasons,” which Alda wrote and directed, about three middle-aged couples whose circumstances change over the course of a year as they take vacations together each season. The ensemble of Alda, Carol Burnett, Jack Weston, Rita Moreno, Len Cariou, Sandy Dennis and Bess Armstrong can’t be beat. Then there is David O. Russell’s 1996 screwball farce “Flirting With Disaster,” where he and Lily Tomlin play Ben Stiller’s birth parents who sell LSD for a living when they aren’t enjoying tantric sex.

5. How he is openly handling his Parkinson’s disease. Much like Michael J. Fox before him, Alda is not shy about discussing his illness that he revealed having in 2015 and continues to act. Last season, he showed up on two episodes of CBS’ streaming legal drama “The Good Fight, “ as Solomon Waltzer, a famous lawyer who is known for shady behavior. Fox, who did guest spots in the series’ predecessor, “The Good Wife,” as a lawyer who used his disease as a ploy to win over judges. Similarly, Alda had a scene in the second season that showed his character’s hand shaking when he was under pressure. Such exposure takes away the stigma of dealing with such conditions.