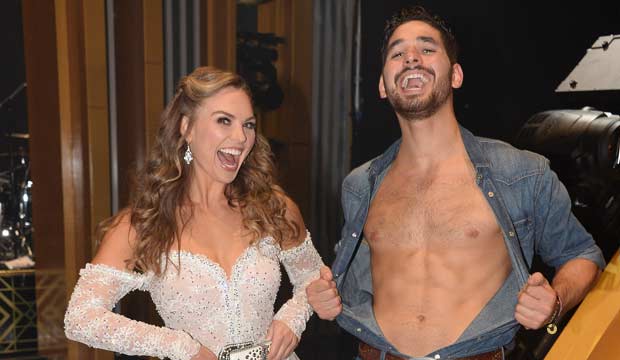 Only one pro among this season’s “Dancing with the Stars” finalists has ever won a Mirror Ball Trophy before: Witney Carson, who prevailed with Alfonso Ribeiro (season 19) and is currently paired with Kel Mitchell. The three male pros she’s up against would all be first-time champs, so we asked our readers which of them most deserves to finally bask in the glory, and the results were decisive. Scroll down for our complete poll results.

Alan Bersten is the greenest finalist in the competition, but he was the overwhelming choice of readers among the winless pros with 62% of the vote, followed by Sasha Farber with 35% and Gleb Savchenko with only 3%.

At age 25, Bersten is the youngest of the remaining pros, and he’s also the least experienced on “DWTS.” This is only his fourth season as a pro following partnerships with Debbie Gibson (12th in season 25), Mirai Nagasu (fourth in season 26) and Alexis Ren (fourth in season 27). To compare, Carson is less than a year older than he is, but she has already competed on the show 11 times, making the finals with both Frankie Muniz (third in season 25) and Milo Manheim (second in season 27) in addition to her victory with Ribeiro.

Farber and Savchenko are both veteran dancers in their 30s, and they’re both competing in their seventh season without a win. Farber came close a couple of times, placing fourth with Simone Biles (season 24) and  third with Tonya Harding (season 26). Meanwhile, the closest Savchenko came was his fourth-place finish with Jana Kramer (season 23).

SEEThese are the ‘Dancing with the Stars’ finale dances (besides, you know, the freestyle)

But while Bersten is the relative rookie of the bunch, he also has the benefit of being paired with “Bachelorette” star Hannah Brown, who is the second highest scoring dancer going into the finale (behind only Farber’s partner Ally Brooke). She’s also the only contestant who has never been in the bottom two after judges’ scores were combined with viewer votes. Our readers think Brown is the Mirror Ball front-runner following the shocking ouster of James Van Der Beek in the Semi-Finals, so the readers who voted for Bersten in our poll just might get their wish. 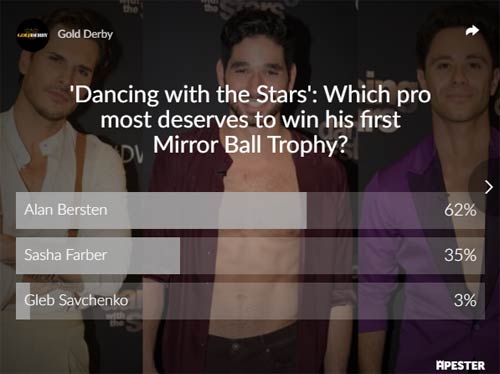