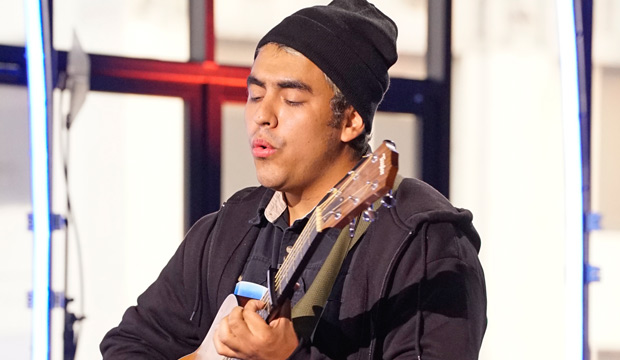 This may come as no surprise to fans of “American Idol” Season 17, but Alejandro Aranda‘s audition video has officially gone viral on social media. Alejandro’s original song “Out Loud,” which he debuted in Los Angeles in front of judges Katy Perry, Lionel Richie and Luke Bryan, has now been viewed a whopping 13.5 million times on Facebook and 6.3 million times at YouTube. While those numbers top all of the other Top 14 finalists, they’re actually just a drop in the water compared to those of two eliminated singers: Shayy and Myra Tran.

Shayy’s audition of Andra Day‘s “Rise Up” has amassed 40.7 million views on Facebook and 3.8 million views on YouTube, making her the most viral artist of the year. This 18-year-old high school student from Midlothian, Virginia recently lost her vision due to a brain tumor, which the doctors were only partially able to remove. “Basically I’m like a question mark,” she noted about the possibility of one day her getting her sight back.

The teenager started experiencing bullying at school after she lost her vision, but we have a feeling things will change after her run on “American Idol.” Shayy was cut in the Hawaii round after performing Adele‘s “All I Ask.” Following her shocking elimination, Luke turned to his fellow judges and proclaimed, “People aren’t gonna like us for that one, and I’m not sure I like us for that one.”

As for Myra, this former winner of “The X Factor: Vietnam” scored 17.1 million Facebook views and 3.2 million YouTube views for her audition of “One Night Only” from “Dreamgirls.” “You’re up there with the Kelly Clarksons of the world,” Luke told the powerhouse singer at the time, with Lionel adding, “There’s nothing to compare you to.”

This 19-year-old from Federal Way, Washington was unfortunately sent home in the Hawaii round after she took on “How Far I’ll Go” from “Moana.” As Lionel explained, “We watched you last night and for whatever reason the song you did last night was not 100% compared to the competition. Unfortunately, it will not take you to the next phase of this competition.”