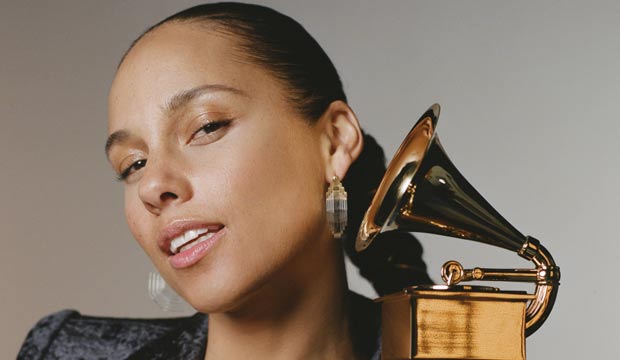 The 2019 Grammy Awards will be presented on Sunday night, February 10 — less than a month away — and they have finally announced a host for the 61st annual event: Alicia Keys, who is no stranger to these kudos. She has taken the stage numerous times as a performer and as a winner, and she has honed her live TV skills as a coach on the singing competition series “The Voice.” So if this gig works out, maybe the motion picture academy should consider giving her a call.

Keys said in a statement, “I know what it feels like to be on that stage, and I’m going to bring that vibe and energy. I’m so excited to be the master of ceremonies on the biggest night in music and celebrate the creativity, power and, magic. I’m especially excited for all the incredible women nominated this year! It’s going ‘UP’ on February 10!”

Grammy executive producer Ken Ehrlich added, “Alicia is one of those rare artists who meld true musical genius with heartfelt emotional lyrics to create a unique approach to everything she does. We have no doubt that she’ll bring all of that as she guides millions of Grammy viewers through what we believe will be a very special show in February.”

Keys broke through at the Grammys in 2002 with her debut album “Songs in A Minor,” which won her five awards including Best New Artist and Song of the Year for her breakthrough hit “Fallin’.” To date she has won 15 Grammys in all, which ties her with Adele as the fourth most awarded female artist in history, behind Alison Krauss (27), Beyonce (22) and Aretha Franklin (18).

SEEGrammys off the deep end? Lady Gaga and Childish Gambino TIED in our Record of the Year predictions

This isn’t the first time the Grammys have enlisted a Grammy winner to host the show — far from it. LL Cool J recently emceed the event for five years in a row (2012-2016). Other hosts over the years have included Frank Sinatra, Andy Williams, John Denver, Kenny Rogers, Paul Simon and Queen Latifah. That puts Keys in elite company. Will she win over viewers as well as she has won over the recording academy?