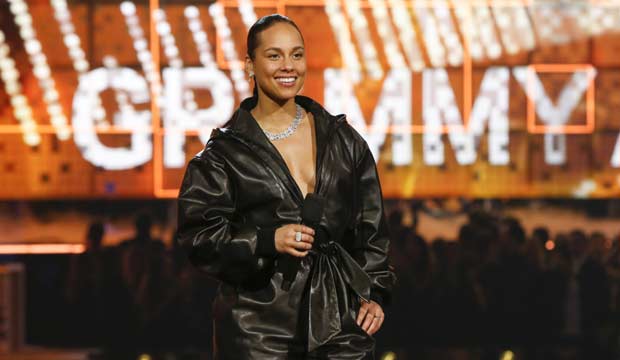 It was an interesting choice when the Grammys announced that Alicia Keys would be hosting the 2019 telecast. She’s an accomplished live performer of course — and she’s got 15 Grammys of her own to prove it — but would her skills lend themselves to commanding a three-and-a-half-hour awards show (almost four hours as it turned out)? Scroll down to vote in our poll and let us know how you thought she did on her first time out.

Though Keys didn’t come into these awards as an experienced master of ceremonies like recent Grammy host James Corden, she was well suited to relate to other musicians given her experience as a performer and winner at these kudos. She even reminisced about some of her experiences on the other side of the envelope, bringing John Mayer onstage for a moment to wax nostalgic about the year they were rivals for Song of the Year; Mayer won, but thought Keys deserved it so much he actually gave her half of his trophy.

And of course Keys was also able to put her Grammy-winning musical chops on display, like when she sang with presenter Smokey Robinson, or when she performed a medley of songs by everyone from Roberta Flack and Lauryn Hill, to Drake and Ella Mai. That’s the kind of interaction that distinguishes a strong host: to simultaneously develop a relationship with the crowd in the live audience, the peers alongside her, and the viewers at home is no easy feat.

Did you think Keys accomplished that feat? Vote below to let us know.