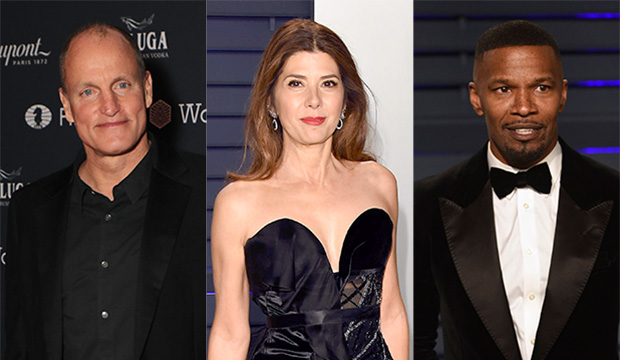 In May 2017, Jimmy Kimmel and Justin Theroux announced they were teaming up to produce a live ABC special that would recreate classic sitcoms. Two years later, it’s finally happening. On Thursday, ABC announced that the 90-minute special will air on May 22 and will be a tribute to Norman Lear‘s seminal “All in the Family” and its spin-off “The Jeffersons.” The star-studded cast includes Woody Harrelson as Archie Bunker, Marisa Tomei as Edith Bunker and Jamie Foxx as George Jefferson. If this goes over well, watch out, Emmys.

While the special itself would be under the live variety special category, performers in live specials compete in the limited series/TV movie acting categories. And with a lot of fluidity in those races this year, these heavy hitters could definitely crash them. Tomei and Foxx are Oscar winners, while Harrelson is an Emmy champ and a three-time Oscar nominee. The roles of Archie and Edith Bunker netted a record four Best Comedy Actor Emmys for Carroll O’Connor and three Best Comedy Actress statuettes for Jean Stapleton, respectively. Meanwhile, Sherman Hemsley was Emmy-nominated for originating George Jefferson.

The rest of the special’s cast ain’t too shabby either. Wanda Sykes, who won an Emmy as part of the writing staff on “The Chris Rock Show,” will play George’s wife, Louise Jefferson, a role that made Isabel Sanford the first black Best Comedy Actress champ. The part of Gloria Stivic — Archie and Edith’s daughter, which earned Sally Struthers two Emmys — will be played by two-time nominee Ellie Kemper. Will Ferrell, who’s also executive-producing the show, will be Tom Willis, George and Louise’s friend and neighbor. On “The Jeffersons,” Tom (Franklin Cover) and Helen Willis (Roxie Roker) were one of TV’s first interracial couples. And finally, Justina Machado, who headlined Lear’s just-canceled “One Day at a Time” reboot, will play George and Louise’s housekeeper, Florence Johnston, for which original portrayer Marla Gibbs received five nominations.

Additional casting will be announced soon. Kimmel and Lear, who is also executive-producing, will host the special, which will recreate one episode of each show. Ten-time Emmy champ James Burrows will direct.

SEE Emmy spotlight: Justin Theroux is a ‘Maniac’ who’s overdue for recognition after those ‘Leftovers’ snubs

If this Lear-inspired special is successful, this could also mean some long-awaited recognition from the TV academy for Theroux, who was overlooked for “The Leftovers,” and Kimmel, who has yet to win for “Jimmy Kimmel Live!”