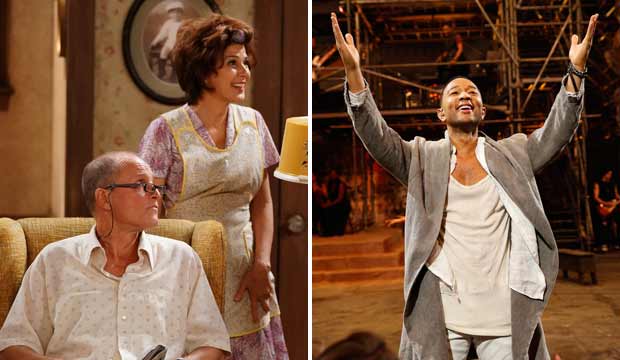 ABC staged a special “Live in Front of a Studio Audience” performance of classic episodes of “All in the Family” and “The Jeffersons” on May 22, and it turned out to be a huge ratings hit, averaging more than 10 million viewers. Will it be an unexpected blockbuster at the Emmys too? It could follow in the footsteps of a live event that took us by surprise last year: “Jesus Christ Superstar.”

“Superstar” aired on NBC as a live concert event on Easter Sunday in 2018. It was well received by critics and watched by almost 10 million viewers, so it was no surprise that it was nominated for Best Variety Special (Live) at the Emmys. But the classic musical exceeded our expectations with 13 total nominations, including Best Movie/Mini Directing and acting bids for John Legend, Sara Bareilles and Brandon Victor Dixon. It ended up winning five awards including Best Variety Special, which meant that producers Legend, Andrew Lloyd Webber and Tim Rice completed their EGOT grand slam of showbiz awards.

The “Family” and “Jeffersons” performance was also received well by critics. Caroline Framke (Variety) wrote that the event “managed to feel both like an artifact of a nostalgic past and the urgent present,” while Marisa Tomei “stole just about every scene with her wide-eyed, full-throated commitment” to the iconic role of Edith Bunker. Jen Chaney (Vulture) added that it “was effective as a televised stage play … and as a reminder that the same social issues addressed in these nearly 50-year-old comedies remain relevant today.” And Kristen Baldwin (Entertainment Weekly) called it a “loving, celebratory exercise in the art of situation comedy.”

With the TV landscape splintering into countless cable TV networks and streaming services, it’s getting harder and harder to achieve the mass appeal that shows like “All in the Family” and “The Jeffersons” achieved in the past. “Jesus Christ Superstar” might have been helped last year by the fact that it broke out of that oversaturated landscape: everybody saw it, and enough of them loved it to secure it surprise nominations for its actors and directors.

“Live in Front of a Studio Audience” broke out too, as evidenced by its blockbuster ratings. And unlike “Jesus Christ Superstar,” “All in the Family” and “The Jeffersons” are already proven hits at the Emmys. “Family” won Best Comedy Series four times (1971-1973, 1978). Meanwhile, “Jeffersons” won Isabel Sanford a historic Best Comedy Actress trophy in 1981; she was the first (and so far the only) black woman ever to win the award. And the re-staged versions of those shows are packed with award-winners. Tomei and Jamie Foxx (George Jefferson) are Oscar winners, while Woody Harrelson (Archie Bunker) and Wanda Sykes (Louise Jefferson) are Emmy champs. The cast also included Emmy winners Sean Hayes and Jackee Harry along with Emmy nominees Anthony Anderson, Ellie Kemper, Kerry Washington and Will Ferrell.

Do you think the television academy will be nostalgic for “All in the Family” and “The Jeffersons”? If so, which actors do you think stand the best chance of breaking through?