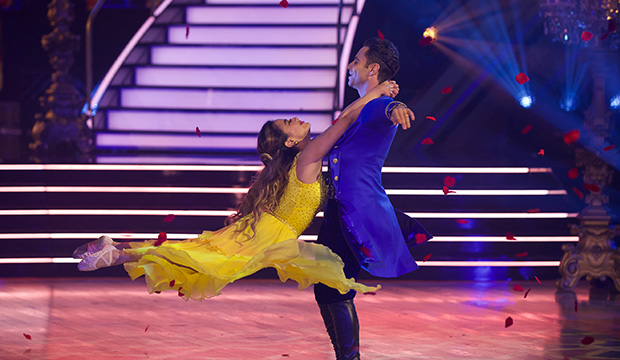 Ally Brooke received the first 9s on “Dancing with the Stars” this season and she may very well be the first to cross the double-digit mark too: 37 percent of our readers believe she’ll nab the first 10.

Brooke, who is tied with the second highest average score this season with James Van Der Beek at 22.2, broke the 9 barrier last week for her contemporary routine, earning three of them across the board for a 27, the top score of the night. That opened the floodgates for three others — Van Der Beek, Hannah Brown and Kel Mitchell — to snag 9s as well. The Fifth Harmony singer has been atop the leaderboard for three straight weeks, but this was the first time she held it solo.

Right on her heels with 33 percent of the vote is Brown, who has the highest average score so far this season at 22.8. The former “Bachelorette” star has twice topped the leaderboard and was the first to get an 8 back in Week 2.

There’s a large drop to third place, which goes to Van Der Beek with 18 percent. The “Dawson’s Creek” star started off hot with the highest score in Week 1, but hasn’t enjoyed the view from the summit since, though he has remained consistent in his dances and scores, which are usually a point or two off the leader. The odds-on favorite to win, Van Der Beek has been slightly underscored this season, which may be why readers are not completely confident in him receiving that 10 first.

SEE Ally? Hannah? The Beek? Who will get the first 10 on ‘Dancing with the Stars’ this season?

Sailor Brinkley-Cook is in fourth with 6 percent. The “Sports Illustrated” model is one of the better dancers this season, but she’s neither been at the top or the bottom of the scoreboard

There’s a tie at 3 percent between Kate Flannery, who’s winning hearts and votes with her skill and personality, and Sean Spicer, which may be the trolliest vote of all considering the man hasn’t cracked a 20 yet (discounting guest judge Leah Remini‘s score in Week 4).

In last with 0 percent of the vote is a three-way tie between Mitchell, Lauren Alaina and Karamo. Mitchell and Alaina have gotten some good scores so far, while Karamo has has had a tougher go of it.

The next question is when will we see the first 10? The judges are running a tighter ship this year — last year, the first 9 was awarded in Week 2; the first 10, Week 3 — so it could be another week or two before we see that paddle.