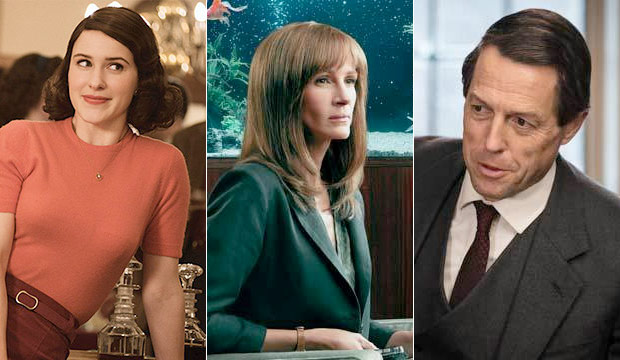 It’s been a whopping 17 years since the same TV network won Best Comedy Series, Best Drama Series and Best Limited Series at the Golden Globes, but magic could strike again this year for Amazon Prime Video. For the 2001 calendar year, HBO took home trophies for “Sex and the City,” “Six Feet Under” and “Band of Brothers” all in the same night. Now, nearly two decades later, Amazon is hoping that “The Marvelous Mrs. Maisel,” “Homecoming” and “A Very English Scandal” follow a similar trajectory.

The Golden Globes are notorious for spreading the wealth each year among studios and networks, which explains why it’s been so long since the same network won all three top prizes. The television landscape is also vastly different now than it was back in 2001, with countless more cable and streaming services in the mix, so if Amazon goes three-for-three it’ll make the victory so much sweeter.

Just two years ago FX had a great night when “Atlanta” won comedy series and “The People v. O. J. Simpson” claimed limited series, however they had no drama series in contention (Netflix’s “The Crown” prevailed). The last network to take home the top comedy and drama trophies in the same evening was ABC in 2006 for “Ugly Betty” and “Grey’s Anatomy.” In fact, the alphabet net also accomplished this feat in 2005 thanks to “Desperate Housewives” and “Lost.”

SEE Golden Globe TV nominations slugfest: So many first-timers, but can ‘Maisel’ pull off a rare repeat win? [WATCH]

“Homecoming” (19/5 odds) also has three Golden Globe bids this year: drama series, actress for Julia Roberts and actor for Stephan James. The psychological thriller about a facility that helps soldiers transition back to civilian life is currently predicted to come in second place at the Golden Globes to BBC America’s “Killing Eve” (69/20 odds), but the race is still too close to call.

In the limited series race, “A Very English Scandal” also contends for lead actor Hugh Grant and supporting player Ben Whishaw. The unbelievably true story about a political sex scandal from across the pond has third-best odds of 4/1 to win, behind predicted leader “The Assassination of Gianni Versace” (82/25 odds) and second-place contender “Sharp Objects” (39/10 odds).