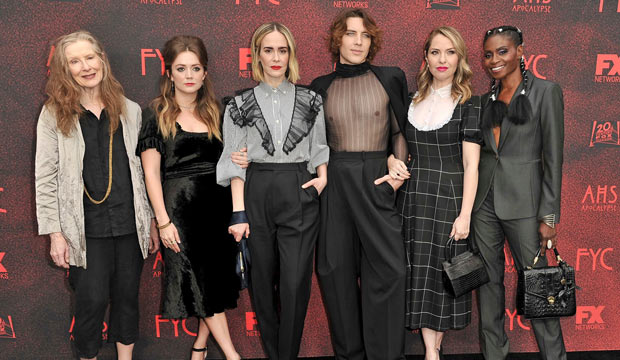 Six cast members from the eighth installment of FX’s “American Horror Story” — Sarah Paulson, Cody Fern, Frances Conroy, Billie Lourd, Leslie Grossman and Adina Porter — recently appeared in front of a live audience of TV academy voters, journalists and fans at NeueHouse Hollywood to discuss all things “Apocalypse.” Don’t forget, this cycle of the frightening program will be eligible as a drama series at the 2019 Emmys, not a limited series, because it features returning characters and plot points from both “Coven” and “Murder House.”

Paulson told the crowd about how she was “sad” she had to say goodbye to new character Wilhemina Venable after only three episodes. “I had grown attached to her, and then [all of a sudden] I was going to be playing Cordelia again, whom I loved,” she readily admitted about her “Coven” supreme witch. Paulson added that she “did not know going in that three episodes in it was like, sayonara Wilhemina Venable and hello Cordelia Goode. I didn’t have enough time with her. That’s a very actress-y thing to say, but it’s true.” In all Paulson portrayed three “AHS” characters throughout this crossover season: Wilhemina, Cordelia and Billie Dean Howard (“Murder House”).

The Emmy-winning actress (“The People v. O.J. Simpson”) also reminisced about stepping behind the camera for the first time to direct the fan-favorite episode “Return to Murder House” that brought back all of the Season 1 characters, including Jessica Lange as Constance Langdon. “It was totally exhilarating, terrifying and confronting, but oddly enough I’d like to do it again,” Paulson smiled. “What I really had to accept about myself was my perfectionism, my control, all of these things needed to be cast aside when you’re directing.”

Newcomer Fern revealed how he was surprised to learn that he was actually playing the grown-up anti-Christ character from “American Horror Story: Murder House.” “I didn’t know until two days before that I was playing Michael Langdon,” Fern remarked. “I was pitched a completely different character, who was the good guy coming into the school and was gonna take on Venable and was fighting for everybody. And then they were like, ‘Oh no, they changed the script, you’re Michael Langdon.'” Fern declared that his most emotional scene from “Apocalypse” was Michael’s death in which Lange was “crying and her tears are falling onto my face. I was like, ‘I’m done.'”

Grossman announced that her most challenging moment as an actress took place in the cabin near the end of the season. “There was a scene where we find out that we’re going to have to do an identity spell to save the world, and I know that I’m going to have to be mean to [Lourd as Mallory],” she stated. “I love her so much. She’s just been so wonderful to me. She’s one of my favorite people in the whole entire world. That was very fun and special.”

Lourd got emotional when she announced that “AHS” has “been an incredible journey for me.” She explained, “The first time I ever cried on camera was with these people on ‘Cult,’ and so getting to do this season where I became more of a common character and literally had the world on my shoulders was such an honor yet so terrifying.”

Porter confessed that she loves working with Paulson because it makes her a better actress. “I learned from ‘Roanoke’ that I better learn my lines, I better know what my circumstances are, if I’m going to be on the same stage as Sarah Paulson,” she divulged. “If you do your homework, then you get to find out how good you can really be when you’re working against her. And I found out, I’m really good.”

Conroy reminisced about all of the scenes at the dinner table at Miss Robichaux’s Academy when all of the cast was together. “Whenever we were in a big group, it was just very beautiful,” said the actress who brought back both Myrtle Snow and Moira O’Hara this season. “We were all telling a story together and we all had wonderful, wonderful people in our lives.”

Following a screening of the “Return to Murder House” episode, everyone was invited to a rooftop reception in which additional cast members like Naomi Grossman and Erika Ervin chatted with fans. Attendees dined on tacos, macaroni and cheese and black bean sliders, with freshly made warm donuts for dessert.