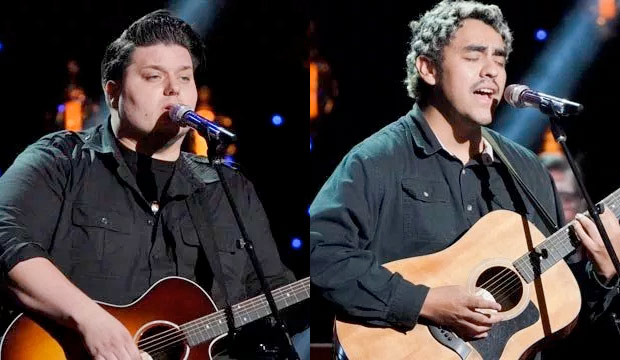 But at least two male winners, Season 13’s burly rocker Caleb Johnson and Season 2’s soulful “Velvet Teddy Bear” Ruben Studdard, who was granted his nickname by guest judge Gladys Knight, didn’t have any problem fitting into their role as the next American Idol.

This year, there are two big guys in the running who are graced with wonderfully unique and mature voices that set them apart from the pack. One is Wade Cota, a 27-year-old Phoenix native with a rather sad back story. His biological father, he revealed during his initial audition, “was the devil.” He would beat him, his mother and his two older siblings. He left Wade with a lingering scar on his face and a crack in his skull. His mother planned their escape for two years before freeing them from such abuse. He hopes being on the show will help pay her back for her sacrifice and courage.

Signs of his early suffering are felt in his emotion-drenched, weathered voice. When he sang a cover of George Ezra‘s“Blame It on Me,”  Judge Lionel Richie said, “You brought me a character because it sounds like you.” Fellow judge Luke Bryan added, “You have your own thing, like Johnny Cash does. I hear your voice in movie soundtracks.” Others have compared his raw yet compelling timbre to Leonard Cohen and Tom Waits, yet he still manages to sound melodic.

The other is Alejandro Aranda, 24, from Pomona, California.  The shy, home-schooled kid turned dishwasher who dresses like a grunge lumberjack began playing music in the streets four years ago. He is self-taught, plays piano and guitar plus writes his own songs. Not throw-away tunes, but full-bodied songs just waiting to hit the charts that he performs effortlessly with smooth confidence. No shrieking needed to grab your ears’ attention.  Little wonder the judges gushed during his original audition. “I just feel like I’m in the presence of greatness,” Luke praised him before adding, “I am so glad you are here. It was like watching my favorite movie that I did not want to end.” Lionel slammed his hands on the table and announced that Alejandro “inspired” him. Katy Perry proclaimed him “an absolute genius.”

SEE ‘American Idol’ Season 17 schedule: When are the live shows and grand finale?

Another thing that distinguish both Alejandro and Wade are their ages. Being in their mid-20s, they have likely have far more real-life experience as well as  confidence in their abilities. You might think teen girls who watch the show will be voting again and again for someone like Laine Hardy, who was cut last season. The 18-year-old, who basically stumbled into auditioning again thanks to the urging of the judges, has upgraded his country image into slick crooner mode and wears suits now. He does clean up good. But the average age of the 16 “Idol” winners so far is 23. Only three contestants were teens when they claimed the title: Fantasia Barrino, 19, Jordin Sparks, 17, and Scotty McCreery, 17. Seems like fans who have voted through the years appreciate talent with a bit more seasoning.

What these two most have in common, besides their size, is that they know who they are and seem fully comfortable in their own skin. On Night 9 of the 17th season of “Idol” this week as the top 20 performed, the producers wisely showcased these guys later in the show. I, for one, couldn’t wait to hear them do their stuff. Alejandro did some nice guitar soloing on Post Malone’s “I Fall Apart” as his vocals poured out like warm butter. Luke told him he is not worthy to critique him. Obviously, there is no need because it is just enough to hear him.

But it was Wade who got the final hero spot on the show and his one-of-a-kind performance of “All I Want” by Kodaline did not disappoint. The joy expressed by his mother  before going on stage for a hug stayed on my mind long after I shut off the TV. “A star is born,” Lionel declared. Who would disagree?

Do you think that Alejandro and Wade could be our final two? Leave your comments below.