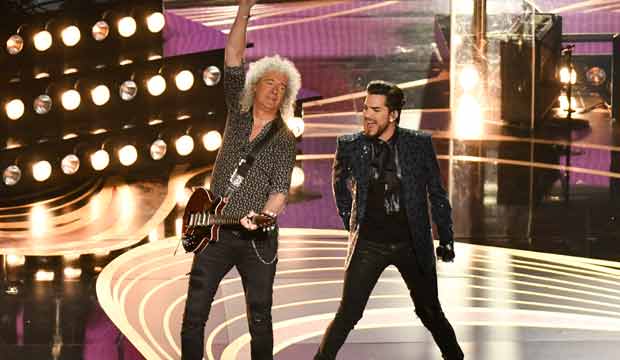 Adam Lambert, the only “American Idol” contestant to ever receive a standing ovation from grumpy judge Simon Cowell, will return to the show on April 28 to mentor the Top 8 contestants. If you haven’t guessed already, the runner-up on Season 8 will tutor the hopefuls when they tackle Queen‘s catalog.

And, even better, we will get to enjoy a Lambert performance on May 19 on the finale show.

Lambert, who secured a spot on “Idol” in 2009 by singing “Bohemian Rhapsody,” ended up performing with Queen on that year’s finale when Kris Allen was a winner. Even he said at the time, “Adam deserved this.” But the singer whose version of  “Mad World” that season was one for the ages has gone on to be the touring frontman for Queen + Adam Lambert.

The producers of the long-running reality competition are wise to capitalize on Queen fever in the wake of the global box-office success ($900 million and counting) of the four-time Academy Award-winning biopic “Bohemian Rhapsody,” whose star Rami Malek took the Best Actor prize as the late singer Freddie Mercury. Lambert had a nifty cameo in the best picture candidate as a sexy bearded trucker who flirts with Mercury at a roadway rest stop.

As Michael Orland, the long-time “Idol” coach who worked with Lambert and other contestants for 16 seasons, tweeted after hearing the news: “Hey #2adamlambert, I should be a psychic. I said a month ago  … that if Idol wanted some ratings finally they would have you on as a mentor. Happy to see that’s happening. So proud of u always. One more reason to watch.”

SEE How is the Top 10 decided on season 17 of ‘American Idol’: By public vote or judges choice?

If you weren’t royally flushed already, ABC will follow up Lambert’s “Idol” appearance the next night with an airing of the special, “The Show Must Go On: The Queen + Adam Lambert Story.”

The April 28 two-hour edition of “Idol,” which will also feature “classic movie duets,” will be live, with viewers nationwide being able to vote for their favorite at the same time as the show will be initially shown at 5 p.m. on the West Coast. Results will be revealed at the end of the night.