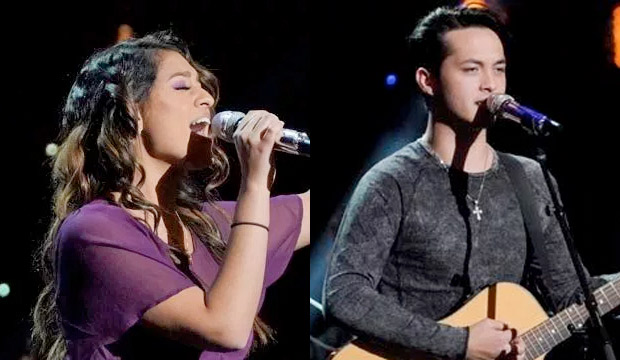 It is hard to be rejected. But if you want to get back in the game, you do what the song says: Pick yourself up, dust yourself off and start all over again.

That is just what “American Idol” contestants Alyssa Raghu, 16, and Laine Hardy, 18, have done.

Alyssa, whom Katy Perry affectionately nicknamed “The Sauce” last season, never made it beyond the  top 24 after a so-so rendition of Coldplay’s “Yellow.” Instead of giving up, she to listened the judges and made upgrades to her stage presence by taking dancing lessons and performing in over 200 live shows. She also switched to being home-schooled so she could focus on her singing.

As she said to the judges during her initial Season 17 audition, “I didn’t come this far to only come this far. When I got eliminated, I realized that it was very new to me. And every single critique you gave me, I worked on that for the past year.” She also told Katy, that she feels more comfortable when she is on stage. “You told me I had to figure out who I was. I know I am Alyssa Raghu and I’m a pop star.”

Because of her efforts, she is now the first person in “American Idol” history to make the semi-finals twice. In Hawaii,  she rocked a figure-flattering white jumpsuit while singing Meghan Trainor‘s “Dear Future Husband.” It was enough to assure her top-20 spot. And on the top-20 show, she sings, “Ain’t It Funny” by Paramore. She knows how to work the stage but the judges didn’t feel the tune wasn’t the best showcase for her voice. We will see if she makes the top-14 next week.

As for Laine Hardy, back when he was a country singer, he was cut in the early rounds of Season 16. But when Laine strolled into the audition room to play back-up guitar for his childhood buddy Ashton Gill‘s audition, the judges urged him to sing for a golden ticket as well. He raspy edge to his voice when he crooned, “The Weight,” and they both went to Hollywood — but only Laine made the top-40 cut.

He, too, has made a change in his image. He has a grown-up haircut — no more bangs. He wears a dapper suit and a tie. And he has expanded beyond country, performing The Beatles‘ “Come Together” (he also scored points by asking the crowd if they were ready to “party with a Hardy”) in Hawaii and delivered Sam Cooke‘s soulful “Bring It on Home to Me” on the Top- 20 episode this week, even switching it up and doing a rocking version of the R&B classic at the end.

If either Alyssa or Laine go all the way and take the “American Idol” title, it wouldn’t be unprecedented to have a previously rejected contestant stage a comeback and win. Season 12 champ Candice Glover auditioned in the ninth and 11th seasons and never made it to the live shows. And Season 13 victor Caleb Johnson tried out on 10th and 11th seasons of “Idol,” and failed to get to the top 25.

Who do you think has the best chance to become the third failed contestant to be the next American Idol? Take the poll below and leave comments about why you back Alyssa or Laine?