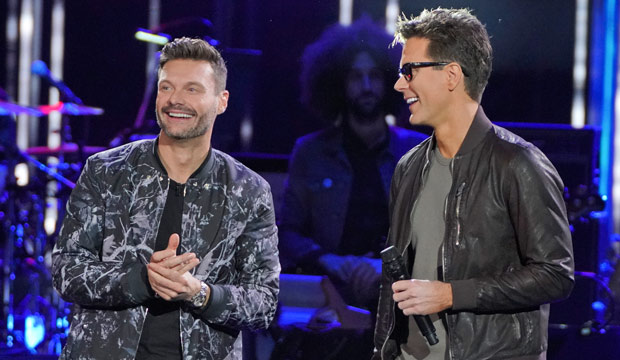 Looks like Ryan Seacrest doesn’t have to worry about not having back-up if he is forced to skip an “American Idol” show again. When the host for all 17 seasons of the reality singing contest called in sick on Monday night and had to miss his first-ever episode that was taped weeks ago, mentor and radio host Bobby Bones was recruited to perform Seacrest’s on-air duties.

Ryan did make an appearance in a clip that opened the show to explain his absence and say his signature line: “THIS is ‘American Idol.’ ” Otherwise, Bobby — who knows how it feels to be a contestant on a TV talent  show after winning the most recent season of “Dancing With the Stars” — managed to keep things moving during the second Top 20 show and stayed out of the way. Bobby did manage to inject some humor, though, as he told he audience, “Sadly, Ryan is sick, and I look the most like him so the asked me to fill his shoes tonight.”

He had to leave it to the celebrity performers who did duets with 10 hopefuls to give them tips and calm their nerves. Instead, Bobby exhibited an easy rapport with judges Lionel Richie, Katy Perry and Luke Bryan.

Speaking of shoes, Seacrest showed his gratitude by sending  a pair of red Jordans to Bobby as a combo thank-you gift and 39th birthday present in early April. Meanwhile, our Gold Derby poll takers also gave him a gift — 82% thought he did a fine job as a substitute host. Most either thought he blended in fine and kept the show moving or considered Bobby to be a great change of pace and did himself proud.

There were a few naysayers: 8% said they missed the energy that Ryan brings every week. But only 4% said that Ryan better not sick again because Bobby was awful. Some were so pleased with his performance, they couldn’t wait to share their approval. Among the comments:

*Sue Wiseman: “I thought Bobby Bones did a great job filling in for Ryan. That is def. who Ryan needs to call on if he needs help again.”

*Lovey: Bobby did Amazing!! To be honest I had actually forgotten that Ryan wasn’t there! Now I do love Ryan and never want to see him call out sick again but Bobby did a great job! Would love to see more of him!

*Katherine Halpainy: “Bobby did just fine. Not as dynamic as ryan but I think he stayed lowkey so as not to outshine ryan.”

*Terry Newman: “I think Bobby was a little bit nervous at first but actually did a really good job. He interacted well with the contestants and the judges. Plus he was funny and kept everything going. Lookout Ryan, Bobby Bones is the real deal.”

*Rhea Moser: “Bobby Bones did an excellent job wonderful mentor did fantastic job filling in for Ryan. But Ryan was missed and American Idol would not be the same without him.”

*Melissa Lewis: “I like Ryan Seacrest; so this is nothing against him personally, but I think Bobby Bones was an amazing host. I wouldn’t mind it if he hosted again.”

*Ruth Laibe: “I thought he did a great job filling in for Ryan. He was humble and didn’t try to upstage Ryan. That shows the true genuineness of his character. I love Bobby Bones but also like Ryan Seacrest. Both are good at hosting !! It’s ironic but I think Bobby does look and sounds like Ryan – they could be bros…..”

*Sue: “Wow what a great job Bobby Bones did filling in for Ryan. I like that Bobby had to use some of his own advise, “relax and have fun”!!! Great job Bobby!”