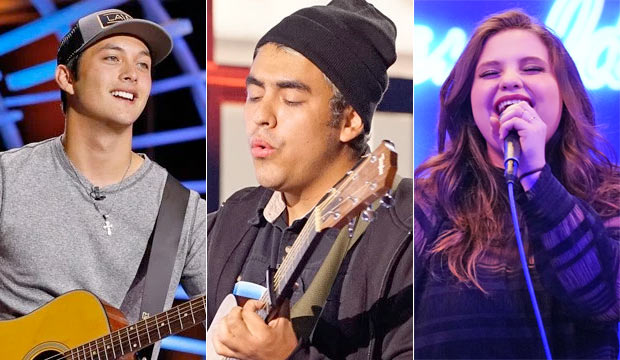 All week long you’ve been giving us your predictions for which three “American Idol” singers will make it into the Season 17 finale, and our racetrack odds heavily favor Laine Hardy, Alejandro Aranda and Madison VanDenburg. Alas, that means our readers predict both Wade Cota and Laci Kaye Booth will be eliminated during the Top 5 episode on Sunday, May 12. Scroll down for our take on each of the predicted Final 3 contestants and then be sure to let us know who you think will ultimately win.

Laine Hardy — 17/10 odds to win
If our readers are correct that Laine will ultimately earn the confetti shower, he’d be the third “American Idol” winner to claim victory after being eliminated in a prior season. (The other two were Season 12’s Candice Glover and Season 13’s Caleb Johnson.) Laine initially appeared last season on “American Idol” — the first to air at its new home on ABC — but he was cut before the live shows. He’s noticeably grown leaps and bounds from last year, not just with his voice but also in his style and stage presence. This time around, it looks like there’s no stopping fans from wanting to “Party with the Hardy.”

Alejandro Aranda — 47/20 odds to win
Since his initial audition, humble Alejandro has been lauded by viewers as one of the best to ever appear on the reality TV show. His audition of his original song “Out Loud” — or as Ryan Seacrest called it, the “best audition ever” — was watched more times than we can count, and he’s wowed fans not just with his smooth falsetto voice but also with his genius guitar-and-piano-playing. It’s no surprise, then, that Katy Perry recently told him, “How wonderfully interesting will it be when you change ‘American Idol’ by winning ‘American Idol.'”

Madison VanDenburg — 82/25 odds to win
You’d think that being called “the next Kelly Clarkson” in her original audition would put pressure on this 17-year-old high school student, but you wouldn’t know it by watching her. In a season that’s been heavily dominated by male artists, Madison is the sole female predicted to make it to the season finale, and for good reason as her powerful voice has never uttered a wrong note. Might there be a scenario where the two boys split the vote, helping Madison claim victory as only the seventh female winner in “American Idol” history?