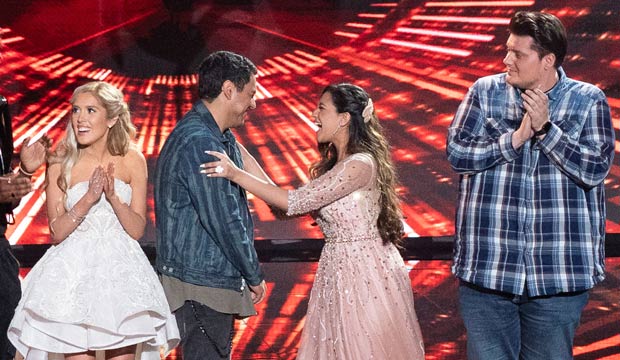 Even after all these years, “American Idol” is still TV’s most-watched reality show. Per TV By The Numbers, ABC’s “Idol” topped all others for the final week of April with 2.0 million viewers in the all-important 18-49 demographic. In fact, it was the #2 program of the week in that age group behind only “The Big Bang Theory” with 2.3 million. As for its closest reality TV competition in the demo, “Survivor” came in with 1.9 million while “The Voice” (Monday) scored 1.5 million and “The Voice” (Tuesday) earned 1.2 million.

“American Idol” was also the most-watched reality show among overall viewers (8.7 million) for the last week of April, but those numbers don’t matter as much to advertisers. This 17th season continues dominating social media each week, with the recent Disney night episode setting a record for the long-running series with two million impressions.

As of this writing there are only six singers left in the competition: Laine Hardy, Madison VanDenburg, Jeremiah Lloyd Harmon, Alejandro Aranda, Laci Kaye Booth and Wade Cota. According to exclusive Gold Derby predictions, Laine has the best odds (2/1) to join the “Idol” winners list after being eliminated last season prior to the live shows.

This season’s trio of superstar judges — Katy Perry, Lionel Richie and Luke Bryan — have been applauded by fans and critics alike for finding such impressive talent throughout the early rounds of Season 17. In fact, many have even called this group of finalists the best the show has ever seen.

During the upcoming Sunday, May 5 episode of “American Idol,” two singers are set to go home … unless the Judges’ Save is finally used. They previously chose not to save Walker Burroughs or Alyssa Raghu on April 28 and Dimitrius Graham or Uche on April 21, so it’s still in play. However, our readers believe that the Judges’ Save will finally be used during Top 6 week.