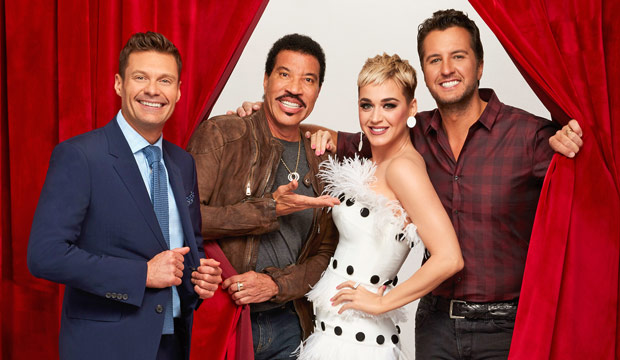 The May 5 episode of the ABC revival of “American Idol” will see the Top 6 cut down to the final four artists in contention for the season 17 title. Each of these half dozen contestants will sing one song from the summer of the Woodstock festival in 1969 and another that is inspirational. At the end of the evening, host Ryan Seacrest will reveal which four number among America’s favorites and will continue on in the competition. One of the two eliminated contestants will be hoping for the judges save from Luke Bryan, Katy Perry and Lionel Richie.

The Top 6 finalists were the leading vote-getters after their performances on Queen Night last Sunday: Alejandro Aranda, Laci Kaye Booth,, Wade Cota, Jeremiah Lloyd Harmon, Laine Hardy and Madison VanDenburg. The other two contestants in the Top 8 — Walker Burroughs and Alyssa Raghu— were sent home when the judges opted not to use their one save of the season.

This episode will be seen live nationwide. Everyone from coast to coast can vote for their favorites. At the end of the two-hour telecast, two artists will be eliminated. For those on the west coast who don’t want to watch live, the show will be repeated in its usual 8 p.m. time slot with a warning that voting is closed.

SEE ‘American Idol’ Top 6: How to vote on May 5 for your favorite artist of Season 17

Below, follow along as we recap all the action on “American Idol” season 17 night 16 in our updating live blog.

Refresh this page for our live updates

8:00 p.m. – With just two weeks to go until the grand finale, the stage is set for America’s vote to decide the season semifinalists. Tonight the judges will oversee performances from the top 6 with live voting taking place throughout the episode to decide which 4 advance. The judges may also opt to finally use their save and bring along a 5th to next week. Will they do it?

8:02 p.m. – First up tonight was Madison with her take on the Janis Joplin classic “Piece of My Heart.” While her voice seemed a little strained it really worked here because, you know, Janis, and with the guitar rock vibe the whole thing just came together nicely. Katy was particularly happy to see Madison with the guitar, Luke told her she’s bene taking their notes and putting in the work each week and Lionel was impressed by her attitude, calling it “star attitude.”

8:12 p.m. – With Joe Cocker‘s “I Don’t Need No Love,” Laine was up next. He also took the stage with a guitar, but for a much more low key performance. The vocal delivery was on point, but his energy felt low, as if he wasn’t putting everything into it. Luke thought it was another correct song choice for his voice and Lionel took that one step further by saying that Laine has found his identity as an artist. Katy detracted from the guys a bit by telling him that he’s ready to push himself instead of staying in the comfortable lane.

8:21 p.m. – The third Woodstock performance came from Jeremiah. He served up a piano cover of Joan Baez‘s “Swing Low, Sweet Chariot.” The arrangement of the song served Jeremiah’s abilities really well, offering him a chance to do the ballad stuff at the start and then migrate into something showier for the end. Lionel was on his feet when the song ended, calling his vocals amazing and pointing out the high ends of his range as especially good. Luke and Katy were just as ecstatic–Luke called it one of his best and most professional performances of the season.

8:32 p.m. – Laci also chose a Janis Joplin song, “To Love Somebody.” In this performance her rasp worked really well and she was able to show a ton of personality in such a short amount of time. Overall it was a solid addition to her season, but probably won’t be her most memorable. Katy’s one bit of criticism was that Laci should have showed more movement on stage, but Luke thought she really commanded attention with her voice in ways that he hadn’t noticed before.

8:37 p.m. – Alejandro quickly followed up with “White Rabbit” by Jefferson Airplane. The dark, moody song was a perfect choice for him and I thought the arrangement worked well to give him a true rocker vibe. Luke thought the performance was an interesting move for him to make and that it fit perfectly into the idea of Woodstock. Lionel thought that he could have used the mic stand a little more dramatically for the camera and Katy agreed.

8:48 p.m. – Wade closed out the Woodstock songs with another Joe Cocker track, “With a Little Help from My Friends.” Of all the songs performed so far, this one was most perfectly suited to the artist and he knocked it out of the park. Both his vocal delivery and stage presence felt natural, as if he was at his own concert and singing his encore. Lionel was once again on his feet, but pacing this time and told him that it was as close to a true 60s performance that he could imagine. Luke said he elevated the energy of the room and all Katy could say was that it was the best performance of the night.

8:54 p.m. – Gabby Barrett returned to the show to provide an interlude to the night’s festivities with a performance of her new single “I Hope.” It was a booming country track with rock and pop vibes that gave me serious Miley Cyrus vibes.

9:04 p.m. – In the next round of performances Lauren Daigle returned to advise the contestants on their showstopping songs. Madison chose Celine Dion‘s “I Surrender,” one of her biggest songs and one Kelly Clarkson covered. It proved to be almost too big for even Madison to handle, but even with a little pitch problems it was still a passionate showing from her. The judges were all on the same page in their critiques–telling her that she has vocals beyond her age, but that she’s at her best when she’s really into feeling the song.

9:13 p.m. – Alejandro decided to sing his own original song in this round, called “Poison.” Performing with the acoustic guitar from within the crowd created the perfect singer-songwriter atmosphere for Alejandro’s performance, by far the best of the night in my opinion and his personal best vocal of the entire competition. Luke was immensely impressed by how well Alejandro played the guitar, Lionel reiterated that he’s already a star and Katy didn’t mince words either–it was the best he’s ever sang on the show and then she hypothesized that he’s going to win the show.

9:21 p.m. – Laci’s cover of Journey‘s “Open Arms” was an outside the box choice for her, but it worked surprisingly well even with her small, deep and textured voice. The song is typically performed much bigger than Laci did, but that’s just another way of saying that she made it her own. Lionel told her that she controlled the vocals and that she’s in her comfort zone and Katy and Luke both said they got emotional over seeing how far she’s come in the course of the show.

9:31 p.m. – Jeremiah’s showstopping song was “Somewhere” from West Side Story, as performed by Barbra Streisand. In rehearsal, Lauren had him sing it a cappella as an exercise, but I wish he had done that in his final performance as well because I think it would have made his vocal the very center of the song. Instead the music made it pretty theatrical, even if his voice sounded great. Luke acknowledged that he started off shaky, but finished the song really well and Lionel pointed out that the audience was locked in to the performance throughout.

9:37 p.m. – With the Shawn James song “Through the Valley,” Wade went a little darker than his first performance, but it still was the perfect fit for his voice. The downside was that his actual performance quality was at a lower energy, even when the vocal was soooo haunting and powerful. Luke and Lionel found the performance believable and Katy made it clear that this week it seems like he finally started believing in himself.

9:46 p.m. – Laine closed out the performances with his take on “Johnny B. Goode” by Chuck Berry. It was exactly the type of “scare yourself” performance that Katy was telling him he needed. He was much more loose and vibrant than previously and because of that his voice opened up and was more dynamic. Lionel called it perfect and told him he’s in love with what he’s doing, Katy was kind of just sweating and screaming in excitement and Luke was, well, speechless.

9:56 p.m. – Voting closed during the last commercial break and so Ryan delivered the results: Madison, Laine, Alejandro and Wade all advanced based on America’s votes!

9:59 p.m. – And so the judges discussed if one of Laci or Jeremiah should be saved and they quickly reached a decision. The answer was simple: the WOULD use the save and their choice was to send Laci through to the next round, which means Jeremiah was the only one eliminated.