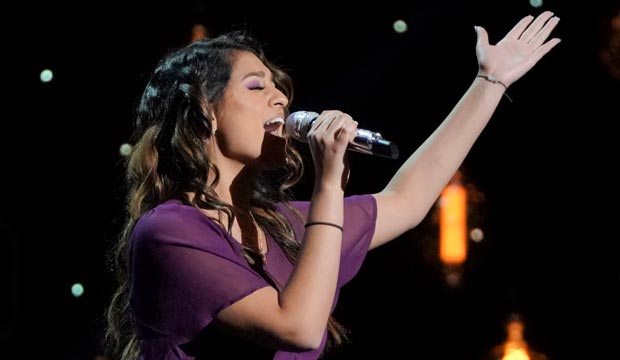 Things are not looking good for “the sauce.” After failing to earn the support of the “American Idol” audience during Top 14 week, Alyssa Raghu had to be saved by judge Katy Perry. Then in Top 10 week Alyssa was the last singer deemed safe by host Ryan Seacrest (though those results were in no particular order). Now, on the eve of Top 8 night, Alyssa once again seems to be on the bubble as she has leading 1/4 odds of being eliminated, according to Gold Derby’s exclusive predictions. If that happens, will the judges use their final save on Alyssa?

SEE‘American Idol’ Top 8 video recap: Who will rock Queen week and is this ‘the best season ever’? [WATCH]

This 16-year-old high school student from Orlando, Florida is no stranger to being eliminated, as she failed to make it into the live shows last year. However, she grew leaps and bounds in Season 17, with Luke Bryan praising her for “coming back and retooling and over-hauling [her] persona.” One of her biggest risks so far this year was taking on Katy’s song “The One That Got Away” in front of the pop star herself, for which she earned strong marks.

In our recent “American Idol” video recap, fellow Gold Derby editor Susan Wloszczyna and contributor Denton Davidson agreed with the consensus that Alyssa is in danger during Queen week. “I love Alyssa, but I think she may go home next week,” I stated. We also worried that the judges might use their save haphazardly and then later regret it if a front-runner like Alejandro Aranda or Jeremiah Lloyd Harmon happens to place in the bottom in a later week.

Based on Gold Derby’s racetrack odds, which are derived from the predictions of readers like you, Alyssa and Wade Cota are the least likely to join the “American Idol” winners list for Season 17. Laine Hardy currently has the best odds of winning (43/20), followed by Alejandro in second place (69/20), Madison VanDenburg in third (18/5) and Jeremiah in fourth (13/2). Then comes Laci Kaye Booth, Walker Burroughs, Alyssa and Wade.

Do you agree or disagree with those racetrack odds, and will the Judges’ Save be used on Alyssa? Let us know by sounding off down in the comments section. Here’s a refresher on Alyssa’s “American Idol” playlist so far: