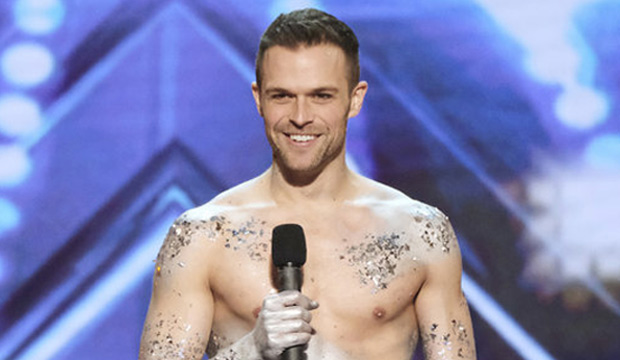 Fans of aerialist Matthew Richardson breathed a sigh of relief Wednesday night as the Savannah, Georgia graphic designer was named the third wild card of “America’s Got Talent” Season 14. Matthew’s original audition, in which he performed an aerial hoop routine, wowed judges Simon Cowell, Howie Mandel, Julianne Hough and Gabrielle Union. However, when the 33-year-old returned in the Judge Cuts he was eliminated following his touching tribute to his father who passed away of cancer. Are you happy Matthew is back on “AGT” in next week’s Quarterfinals 3? Sound off down in the comments section.

“When you think of professionals, you think of people who’ve trained their whole life,” Matthew declared back in his audition. “You don’t think that you can start this sort of thing at 20-something years old. I really believe this show has potential to change my life.” Matthew came out on stage wearing a silver speedo and covered in paint and glitter from head to toe, telling the judges, “I love performing. It’s my passion. It’s what I’ve worked hard for.”

Matthew performed his first routine to the show tune “Memory” from “Cats.” His return to the reality TV show featured a classical backing track, “String Quartet No. 5,” set against his father’s voice. Even though the judges eliminated Matthew in that round, they still gave him nothing but praises in their critiques of his performance.

SEE‘America’s Got Talent’ live show 2 results: Which of the 5 eliminated acts deserves the Wild Card? [POLL]

So far this season wild cards have had mixed results making it through to the Semifinals. The first such act, singer Ansley Burns, narrowly escaped elimination when she won the Dunkin’ Save. Then this week, magician duo The Sentimentalists were one of the acts who received the lowest number of votes from America.