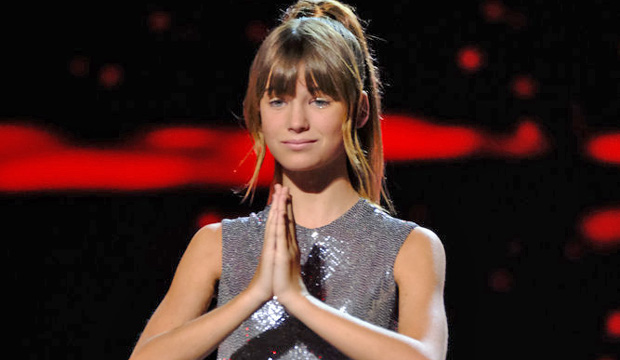 That sound you hear are thousands of “America’s Got Talent” fans outraged by 13-year-old singer Charlotte Summers being eliminated during the second round of Quarterfinals. Our readers recently voted that the talented teen should get another shot at performing live in front of America as the Semifinal wild card, which will be announced in the coming weeks. But how did we get here in the first place? How did this fan-favorite find herself eliminated so early in the competition? The answer: song choice.

Judges Simon Cowell, Howie Mandel, Gabrielle Union and Julianne Hough all scolded Charlotte for singing Shirley Bassey‘s “Diamonds Are Forever” because it didn’t fit her age or her personality. But a couple remarks from Howie and Simon had fans scratching their heads in confusion. Did this native of Spain choose to sing the classic James Bond anthem, or was the song forced upon her by someone else — i.e. producers, parents, managers?

SEECheer up, Charlotte Summers: 54% of ‘America’s Got Talent’ viewers want you back as the Wild Card in semifinals

“I don’t know that I would have chosen that song,” Howie proclaimed on live television, “but the fact that that song was chosen, nobody could have done it better.”

Let’s keep in mind that the first two times Charlotte performed on “AGT,” she also took on older songs: “I Put A Spell On You” from 1956 in her audition and “You Don’t Own Me” from 1963 in the Judge Cuts. For the judges to all of a sudden accuse Charlotte of singing something too old goes against their previous praises. “Diamonds Are Forever” actually comes from the 1971 James Bond film of the same name, so it’s the most recent of all of the songs she performed on the show.

Heading into “America’s Got Talent” Season 14, Charlotte had a built-in audience from her stints on Spain’s “Le Voz Kids” and “Little Big Shots” with Steve Harvey, which makes it even more shocking to see her eliminated before the Semifinals. Will the judges make things right with Charlotte by naming her as the next wild card? And will we ever find out who told Charlotte to sing “Diamonds Are Forever”?