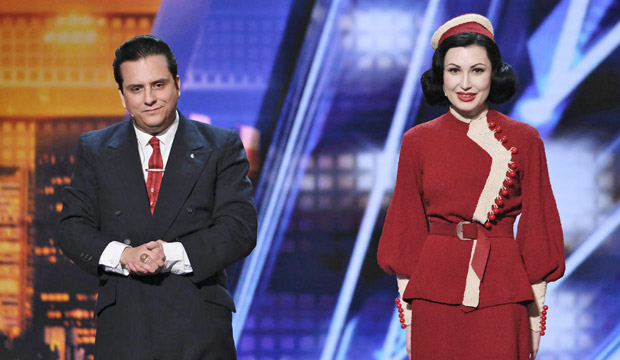 The second Quarterfinals episode of “America’s Got Talent” didn’t go according to plan, with several acts earning negative comments from the judges and even red X’s. Seven of this week’s 12 acts will go through based on America’s vote, while five will be eliminated. Gold Derby readers have been making their predictions all week for who they think will be saying goodbye during Wednesday’s results episode, and things are not looking good for singer Charlotte Summers, contortionist Marina Mazepa, danger act Nick & Lindsay and wild card magicians The Sentimentalists. While these four acts are the most likely to be eliminated, which fifth act may be joining them?

On the flip side, the six acts who seem to be the safest heading into the second live results show of Season 14 are singer Chris Klafford, light-up dancers Light Balance Kids, chorale group Ndlovu Youth Choir, stand-up comedian Ryan Niemiller, violinist Tyler Butler-Figueroa and dance group V.Unbeatable. These half-dozen contenders should all sail through to the Semifinals based on America’s overnight votes, unless something crazy happens on Wednesday night.

That means the remaining two acts are on the bubble: Howie Mandel‘s Golden Buzzer rapper Joseph Allen and blind singer Robert Finley. Which one will advance to the next round which one will be eliminated? Our readers are split, so be sure to give us your snappy judgments down in the comments section.

Both Joseph and Robert heard mostly positive feedback from judges Howie, Simon Cowell, Julianne Hough and Gabrielle Union during Tuesday’s live performance episode, which makes America’s task so much harder. Among the accolades, Howie told Joseph he’s a “shining light” while Gabrielle informed Robert he’s a “gift to us all.”

Do you agree or disagree with our readers’ “AGT” elimination predictions? There’s still time to make your picks — it’s free and easy to register for an account via email, Facebook, Google or Twitter. The eligible user who does the best predicting the Quarterfinals 1 results show will receive a $100 Amazon gift card, so what are you waiting for?