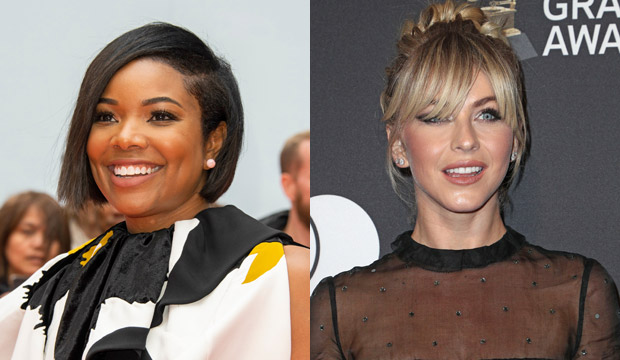 The season 14 premiere of “America’s Got Talent” on May 28 marked the debut of Julianne Hough and Gabrielle Union as judges. They replaced Mel B and Heidi Klum, who had been with the show since season 8. What do you think of these two new additions to the panel? Do you miss Mel B and Heidi or are you glad that they are gone? Give a grade to Gabrielle and Julianne in our poll below and then sound off in the comments section.

Gabrielle can currently be seen in the new TV crime drama, “L.A. Finest,” which is a spin-off from the “Bad Boys” film franchise. Julianne, who got her start as one of the pros on “Dancing with the Stars,” has moved into acting as well headlining “Grease Live” and “Rock of Ages.”  Their predecessors on the panel are busy too: Mel B is on the road with the Spice Girls while Heidi and her “Project Runway” co-host Tim Gunn are developing a new show for Amazon.

While the two women on the “AGT” judging panel were replaced the two men —  Simon Cowell and Howie Mandel – remain the same. Although he is an executive producer on the show, Simon says it was NBC that asked for the changes to the line-up. This reality show veteran is impressed with how well the two new additions have fit in from the start. “Julianne is very funny, very emotional, very kind and she loves the talent. And Gabrielle wants to do the show for the right reasons; she’s very interested in the process for discovering talent.”

Gabrielle had the first Golden Buzzer act of this edition of “AGT,”  a singer/pianist named Kodi Lee, who is legally blind and autistic. As she explained, “I’m a new judge this season and I’m also a new mom this year. It’s the toughest job I’ve ever had and the most rewarding job I’ve ever had. You just want to give your kids the moon, the stars and the rainbows. And tonight I’m gonna give you something special.”