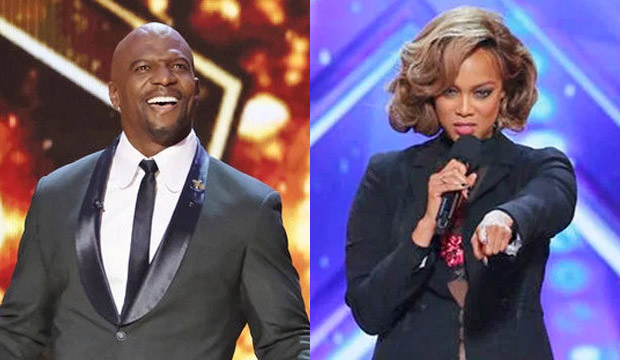 It’s official: “America’s Got Talent” fans love the fact that NBC has hired Terry Crews as the new permanent host of the flagship reality TV series, replacing Tyra Banks. In our recent poll asking “AGT” viewers what they thought of this dramatic shakeup, a whopping 68% said that Terry was “the perfect choice.” To compare, 21% thought Tyra “did a much better job” while the other 11% of voters were non-committal. Let us know what you think down in the comments section.

SEEGabrielle Union and Julianne Hough join ‘America’s Got Talent’ Season 14, but which 2 judges are they replacing?

Season 14 of “AGT” debuts this summer on NBC after a very successful spinoff series, dubbed “America’s Got Talent: The Champions,” aired for seven weeks this winter. (The finale took place Monday, February 18.) Terry was the host of “Champions” where he welcomed 50 returning acts from around the world that competed for the crown in front of judges Simon Cowell, Howie Mandel, Heidi Klum and Mel B. Find out who won by reading our live blog.

Of this quartet of judges, only Simon and Howie will be returning for Season 14. Yes, that means that Heidi and Mel have decided to leave the franchise they’ve called home since 2013. In their places NBC has hired a pair of superstar actresses: Gabrielle Union and Julianne Hough. While Gabrielle is relatively new to reality TV, Hough was a former judge on “Dancing with the Stars” so she’ll be bringing a lot of experience to the “AGT” panel.

Before joining the “Got Talent” family Terry had previously hosted “Who Wants To Be A Millionaire” and “World’s Funniest.” Many TV fans also know him as Sergeant Jeffords on “Brooklyn Nine-Nine,” where he loves to show off his pecs dance. When I spoke to Terry earlier this season he said, “I want to be the host for ‘Americas Got Talent’ from here on out. If Simon will have me back, I would be honored to do it again.” It looks like Terry, as well as the fans, have all gotten their wish.

Terry’s hiring means that Tyra only served as host of “Americas Got Talent” for two years: Season 12 in 2017 and Season 13 in 2018. She had replaced long-time ringleader Nick Cannon, who starred from Season 4 to Season 11 (2009-16). The other two “AGT” hosts who presided over the first three years of the show were Jerry Springer (2007-08) and Regis Philbin (2006). Tyra announced her resignation from the show on Christmas Day 2018, two weeks before the premiere of “AGT: The Champions.”