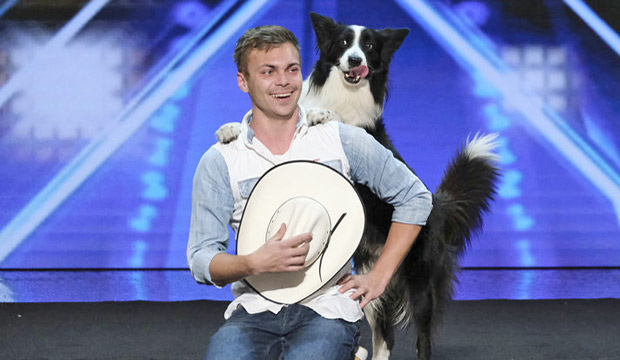 Everyone’s favorite animal act, Lukas & Falco, was eliminated during Wednesday’s Quarterfinals 3 results episode of “America’s Got Talent” when the judges opted to save guitarist Marcin Patrzalek instead. It all came down to these two after stand-up comedian Jackie Fabulous won the Dunkin’ Save, meaning she joined the following fan-voted acts heading through to the Semifinals: chorale group Detroit Youth Choir, singers Benicio Bryant and Emanne Beasha, and magicians Eric Chien and Dom Chambers. So why did the “AGT” judges send Lukas & Falco to the dog pound? And might they receive a wild card spot?

SEE‘America’s Got Talent’ live show 3 results: Which of the 7 acts to advance is likeliest to win ‘AGT’? [POLL]

“I took a lot of heat last night,” Howie Mandel said in reference to having given the dog act a negative critique during Tuesday’s performance episode. “Lukas & Falco, you are wonderful. You’re doing things beyond anything that I could do. America loves dogs. They hated on me on Twitter. I’m a huge fan of dog acts but I’m jaded by [Season 7 winner] Olate Dogs and people who’ve been here in the past.” He also referenced Sara and Hero, finalists in Season 12 who returned in this winter’s “AGT: The Champions” spinoff series. Ultimately Howie gave his vote to Marcin because his gut told him to go with “something I’ve never seen before.”

Gabrielle Union chimed in, “You did teach that dog new tricks, I don’t care what anybody says,” which was a stark rebuke to Howie’s comments from the previous night. She continued on by telling Lukas & Falco, “You definitely stepped it up. You raised the bar. You guys did amazing.” But then Gabrielle turned around and called the 18-year-old Polish guitarist a “genius.” “I have to go with a once in a lifetime, once in a generation talent, and that is Marcin,” she declared.

SEE‘America’s Got Talent’ live show 3 results: Which of the 5 eliminated acts deserves the Wild Card? [POLL]

At that point the vote total was two for Marcin, zero for Lukas & Falco. Because time was running short, host Terry Crews skipped over Julianne Hough and went straight to Simon Cowell. “You know how much I love dog acts,” Simon began. “Marcin, your song choice was horrendous last night. But you’re the one who’s got potential maybe to have a chance of winning, which is why I’m gonna choose you to go through.”

Simon’s vote meant Marcin made it through to the Semifinals while Lukas & Falco were eliminated. There is still one more wild card spot left in the competition, so fans of the dog act have their paws crossed that Lukas & Falco will be given that honor. We’ll find out next week when the first of the “America’s Got Talent” Semifinals air live on Tuesday, September 3 and Wednesday, September 4.