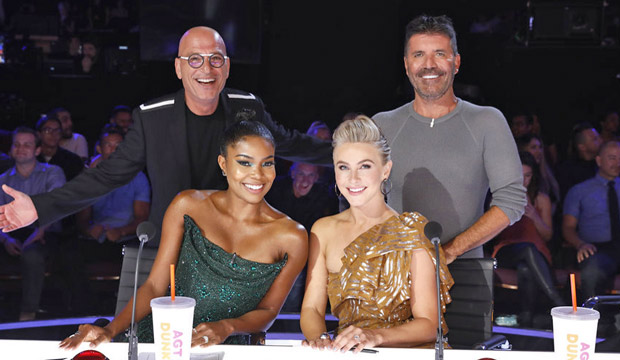 After months of taped audition episodes, “America’s Got Talent” has finally gotten to the live shows. The second of the three quarterfinals is on NBC on Tuesday, August 20 beginning at 8 pm ET/PT. The four judges — Simon Cowell, Julianne Hough, Howie Mandel and Gabrielle Union — no longer have complete control. Rather, viewers vote for the acts that they want to see move on to the semifinals based on their performances in this two-hour edition of “AGT.”

Twelve acts are set to take to the stage to perform on Tuesday’s quarterfinal 2. Only seven will make the cut and still be in with a chance to win the $1 million grand prize and an opportunity to headline at a Las Vegas casino showroom. Three of these dozen hopefuls for the season 14 championship earned the coveted Golden Buzzer at their auditions, which sent them straight through to the live shows. They are rapper Joseph Allen, kid violinist Tyler Butler-Figueroa and dance troupe Light Balance Kids.

SEE ‘America’s Got Talent’ quarterfinal 2: How to vote for your favorite act to win ‘AGT’ season 14

Below, read our live blog recap of how they and the other nine acts as they were showcased on Tuesday’s live show, which is episode 14 of season 14. Who impressed you the most and who was the biggest disappointment? Be sure to sound off with your thoughts down in the comments section.

8:03 p.m. – First to perform tonight was Charlotte Summers. She opened the show with a high drama rendition of “Diamonds Are Forever” by Shirley Bassey. Her voice was controlled and boomed through a number of big notes though her stage presence was a bit subdued. The judges felt like her “dynamic personality” didn’t shine tonight despite the vocal being a powerhouse. For Simon it just came down to a “terrible, terrible, terrible” song choice for her.

8:14 p.m. – Violinist-opera singing-knife throwing duo Nick & Lindsay were next to present their potpourri of talents. Tonight they added lip synching (to “Ring of Fire”) to their list of talents through a theatrical and comedic performance that, yes, included Lindsay throwing flaming blades at Nick with her feet. Unfortunately those blades didn’t stick in the wood she threw them at which made for an overall messy execution that caused both Simon and Howie to hit their red X buttons. For Julianne it was “so bad it was good,” but the other judges did not like it at all.

8:24 p.m. – Chris Klafford came to the stage for a heartfelt performance with nothing but his guitar and his stunning voice. Julianne and Gabrielle were on their feet for an ovation, welcoming him back with enthusiastic praise. While the women were clear team Chris, Simon and Howie did not feel the emotional connection to the song. So on this one the judges were split, adding to the perception that tonight was not off to a great start for the acts.

8:36 p.m. – Next up was contortionist Marina Marzepa with her “creature” that she likes to let “take over” when she performs. She crawled around the stage in her acrobatic way–spiderlike and bending her limbs in ways none of us ever could. While the music and set were dark and creepy, the movements played a bit one note and weren’t exciting enough to keep Simon from hitting his red X (again?!). Simon explained that there wasn’t enough craziness in her movements and that it became boring. He wanted special and she didn’t deliver it. But Howie countered with Simon’s “boredom being [his] dream.” Another split panel?

8:44 p.m. – In his package, Robert Finley reiterated that “a winner never quits,” an apt statement for someone using the platform to live out his dream later in life. After the string of underwhelming acts before him, Robert impressed the panel with his bluesy performance–even Simon stood for an ovation! Of course, it couldn’t be a perfect 4 out of 4 though. Howie had to bring the mood down by telling Robert that the song probably won’t connect with younger voters and that it was a risky choice.

8:55 p.m. – The next act on stage was the night’s wild card act–The Sentimentalists who were cut in the last round, but asked back by producers to join the live shows. For their chance at a comeback they used the judges as assistants in a series of mind reading acts involving foods and flavors. It was slow going and a bit awkward to get to the point and unfortunately even the climax fell flat as Howie stuffed his face with sweets. In their critiques, the judges felt like they hadn’t rehearsed enough and Simon called it a “total mess.”

9:05 p.m. – After yet another rough performance, comedian Ryan Niemiller came out in the hopes of raising the spirit of the night with some laughter. His energy was immediately engaging and hyped–he went through bits about the New Years resolutions no one actually checks up on and jokes about disability, his youth living in a trailer and how dangerous tornadoes can be. He earned the first full panel standing ovation of the night with all four giving him congratulations and words of encouragement for his act tonight.

9:16 p.m. – Hoping to make it a streak of two good performances in a row was dance crew V.Unbeatable with a big show of their trick-heavy dancing style. On the big stage with pyrotechnics and better overall effects, the crew’s style really came through and created a great energy. By the end Simon was bowing down and the crowd was hype! He said they continue to push boundaries and made every second of their 2 minutes count. Julianne called it the best act of the night and Howie said in all his years on the show it was the best performance he’s ever seen.

9:25 p.m. – Howie’s Golden Buzzer choice, Joseph Allen, was up next to perform his signature mixture of rap and singing for an uplifting love song to his mom. It was a touching and dynamic song that brought Gabrielle and Howie to their feet to heap praise upon him. He said that he wasn’t even singing the song, but instead “living the song” which is completely accurate. Gabrielle praised his ability to be a “vulnerable man” on stage and thought it was a great way to show his talent.

9:35 p.m. – With their own Golden Buzzer under their belts and in the shadow of their parent act, Light Balance Kids hit the stage hoping to continue to impress with their graphic design dance show. Their performance tonight played up the concept of good and bad guys to the tune of recent #1 track “Bad Guy” by Billie Eilish and “Sucker” by the Jonas Brothers. Both Gabrielle and Julianne found the performance “unbelievable,” but Simon pulled back a bit by pointing out that there was no “wow factor” despite them being so talented. He called the whole thing “tame” and a comparative lack of energy next to V.Unbeatable.

9:46 p.m. – And to cap off the trio of Golden Buzzer acts, Tyler Butler-Figueroa followed with his violin performance. Compared to the rest of the acts tonight, Tyler was lively and took control over the stage and his performance. The judges were enthusiastic for his performance and personality, considering him one of the likely favorites among the audience.

9:57 p.m. – Ndlovu Youth Choir closed out the show with a rousing performance of their traditional African singing and dancing. Gabrielle told them they set the stage on fire and Simon said they “popped,” calling out their enthusiasm and picking the perfect song to make the whole thing click.

SEE ‘America’s Got Talent’ live show 1 results: Which of the 7 acts to advance is likeliest to win ‘AGT’? [POLL]