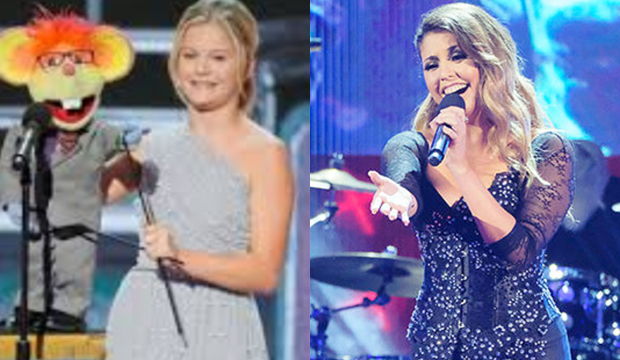 At the end of the January 14 episode of “America’s Got Talent: The Champions,” host Terry Crews revealed that Darci Lynne Farmer had lost the vote to Cristina Ramos. Did the superfans get it wrong? Do you think that Darci Lynne, who won “AGT” in 2017 deserved a place in the final over Cristina, who took the title in the 2016 season of “Spain’s Got Talent.” Vote in our poll below and sound off in the comments section.

Darci Lynne opened the second episode of the show with her puppet pal Oscar the Mouse. He admits to being nervous, but then joins Darci Lynne for a rocking medley of the Tina Turner classics “Nutbush City Limits” and “Proud Mary.”Our live blogger John Benutty thought the world of Darci Lynne Farmer’s performance: “She set the standard very high for the rest of the night, receiving a standing ovation from the judges and audience. Simon said that Darci deserves to be the world champion.”

WATCH  Darci Lynne Farmer returns to ‘America’s Got Talent: The Champions’ and wows the judges

Cristina was the fifth of the 10 acts to perform. She revealed that this was her first time in the United States. Before she sang, we learned that she was from a small island and still can’t believe that she won this show in her native Spain. She dazzled the crowd with her mash-up of rock and opera on the Queen anthem “Bohemian Rhapsody.” After she sang, John observed: “The crowd roared following Christina’s performance, leading me to believe that it was magnetic in the theater. Mel was especially hyped up for it and while Howie and Heidi were a little more muted than her in their response they also loved what she did. Simon called her voice “off the charts” and seemed legitimately left in disbelief over her talent.”

WATCH Cristina Ramos voted into ‘America’s Got Talent: The Champions’ final: See what she did to beat Darci Lynne Farmer

Who do you think deserves to be in the final of “AGT: The Champions”? Cast your ballot below and then have your say in the comments section.