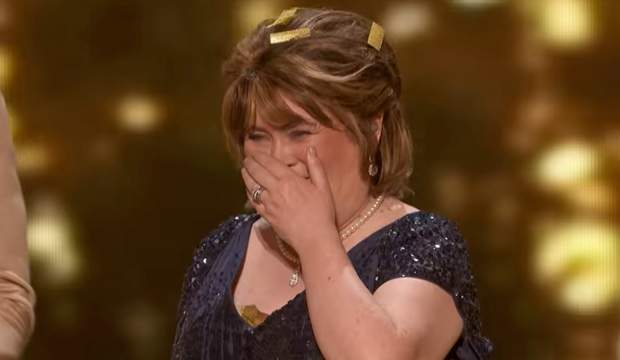 The ratings are in for NBC’s reality TV show “America’s Got Talent: The Champions,” and they’re deserving of a Golden Buzzer. A whopping 9.9 million viewers (1.8 demo rating) tuned in for the season premiere of the spinoff series that brings back 50 popular acts from around the world, including singing superstar Susan Boyle. Billed as the “Olympics of talent,” the episode is now the #1 debut for an unscripted series in almost three years since “Little Big Shots,” per TVLine, even outpacing last week’s “The Masked Singer” premiere.

Boyle, who rose to fame on “Britain’s Got Talent” back in 2009, was the star of the season opener as she earned Mel B‘s Golden Buzzer following her performance of “Wild Horses.” “You should have got that the first time around,” Mel B whispered to the 57-year-old Scotland native who’s sold over 20 million records over the past decade.

Golden confetti in her hair, Boyle wept tears of joy as she stared out at the hundreds of people who were giving her a rousing standing ovation. When new host Terry Crews asked her what it meant to receive such a warm welcome from the American audience, Boyle simply said, “I’m very happy and very humble. Thank you all very much.”

SEEDid Superfans goof by sending Sara and Hero to the dog house on ‘America’s Got Talent: The Champions’? [WATCH]

In “AGT: Champions,” receiving a Golden Buzzer means that you advance immediately to the Finals. There will be five Golden Buzzers awarded over the first five weeks of competition — one from each judge, plus Crews. The other five finalists will be chosen by a group of Superfans, delegates from each of the 50 states. In the first episode Boyle received the Golden Buzzer while comedian Preacher Lawson earned the Superfan vote.