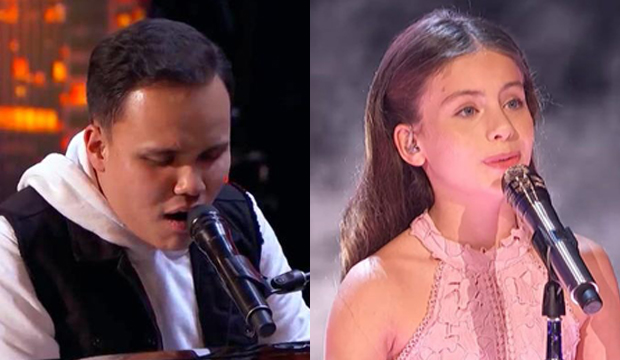 Kodi Lee may regret being the “America’s Got Talent” frontrunner from the very start of season 14. With just hours left before he performs in the “AGT” final on Tuesday September 17, this singing sensation has seen his lead over child prodigy Emanne Beasha shrink. The little girl with a grown-up voice has pulled perilously close to him in our exclusive poll of “America’s Got Talent” viewers.

Beasha and Lee have never faced off against each other. Each got a Golden Buzzer which sent them straight to the quarterfinals. Lee was the highlight of the first quarterfinal while Beasha shone on the third show. They then appeared on separate semifinals. Lee was the stand-out act on the first semifinal on Sept. 3 while Beasha stole the show on the Sept. 10 second semifinal. Tuesday’s live final on NBC will bring us the much-anticipated title bout of Kodi Lee vs. Emanne Beasha.

Are you on Team Beasha or Team Lee? Or do you prefer one of the other eight finalists? Who do you think will be named season 14 champ on Wednesday and win the $1 million grand prize and a chance to perform at a Las Vegas casino? After reading our recaps of the performances on the semifinals of all 10 acts that have made it through to this stage of the competition, be sure to make your predictions in the poll below as to the final results.

Emanne Beasha
This 10-year-old opera singer, who won Arabs Got Talent in 2017, is Jay Leno‘s Golden Buzzer and performed an Italian version of “(Everything I Do) I Do It for You” by Bryan Adams.

Benicio Bryant
This teenage singer, who is a veteran of “Germany’s Got Talent,” sang another original song.

Detroit Youth Choir
This group of underprivileged young people, who are Terry Crews‘ Golden Buzzer, sang “High Hopes” by Panic! at the Disco.

Kodi Lee
This singer, who is both blind and autistic, is Gabrielle Union‘s Golden Buzzer and showcased his wide range with a cover of Calum Scott’s “You Are the Reason.”

SEE ‘America’s Got Talent’ controversy: Is Emanne Beasha too young to be on ‘AGT’?

Light Balance Kids
This ligbt-up dance group from Ukraine is Ellie Kemper’s Golden Buzzer and portrayed the Marvel Cinematic Universe heroes in a routine set to  “Rock You Like a Hurricane” by the Scorpions and Bon Jovi‘s “Livin’ on a Prayer.”

Ryan Niemiller
This stand-up comedian has overcome physical adversity to pursue his dream.

Ndlovu Youth Choir
This chorale group from South Africa raised the roof with their rendition of the Whitney Houston and Kygo version of “Higher Love.”

V. Unbeatable
These tumblers from India are Dwayne Wade‘s Golden Buzzer and did stunts from a rotating ladder.

Voices of Service
This quartet of veterans harmonized on “Choke” by OneRepublic.

Who do you want to win “America’s Got Talent” 2019? Cast your vote in our poll and then sound off in our comments section at the bottom of this post, especially if you think the winner should be someone other than Kodi or Emanne.

Be sure to make your “AGT” predictions to influence our reality TV racetrack odds. You can keep changing your predictions until just before the next results show airs on NBC. You’ll compete to win a $100 Amazon gift card and a spot on our leaderboard. See our contest rules and sound off with other fans in our reality TV forum. Read more Gold Derby entertainment news.

Parvati Shallow poised to take on 'killers' in 'Survivor: Winners at War': 'I've got my dagger behind my…

'America's Got Talent: The Champions' judges save JJ Pantano despite his roasting of their…