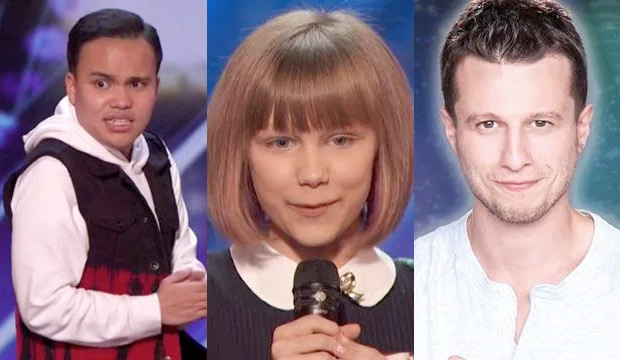 With Season 2 of “America’s Got Talent: The Champions” gearing up for a January 2020 debut, fans of the original series have their fingers crossed that three former winners will be asked back to defend their titles against competitors from all over the world. Blind singer Kodi Lee (Season 14), singer/ukuleleist Grace VanderWaal (Season 11) and magician Mat Franco (Season 9) topped our recent poll that asked “AGT” viewers to name which winners they want to see return. Scroll down to see the complete poll results.

Kodi is the most recent act to join the “AGT” winners list, prevailing during the September 18 finale against runners-up Detroit Youth Choir. This 23-year-old powerhouse wowed America during his audition of “A Song for You,” earning Gabrielle Union‘s Golden Buzzer. The fan-fave later returned in the live shows where he received unanimous praises from the judges following his now-viral covers of “Bridge Over Troubled Water,” “You Are the Reason” and “Lost Without You.”

Grace’s victory in the 11th season meant she was only the second female to win “America’s Got Talent” since the very first year. Her runner-up was mentalist duo The Clairvoyants. At only 12 years old, Grace received an early boost that season thanks to Howie Mandel‘s Golden Buzzer in her audition, in which she performed an original song titled “I Don’t Know My Name.” Soon after the show wrapped, Grace took home the trophy for Next Big Thing at the Teen Choice Awards.

Franco was the first magician to claim victory in the ninth season, beating out singer Emily West. Four years later Shin Lim joined him on the winners list, then went on to prevail in the first-ever “Champions” season. For the past several years Mat has headlined his own magic show at LINQ Hotel & Casino in Las Vegas, making him one of the most successful “AGT” winners ever. Does his busy schedule allow him the chance to take part in the second cycle of “Champions”?

Here are our readers’ complete poll results for which former winners they most want to see on “America’s Got Talent: The Champions” Season 2: