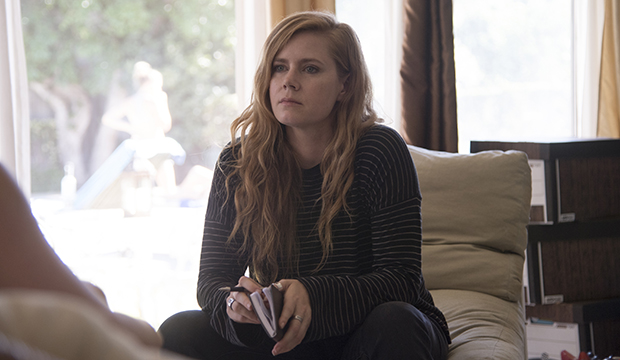 Amy Adams has gone 0 for 6 at the Academy Awards, but she could rake in some hardware at another industry awards show: the Emmys. She received two nominations for “Sharp Objects,” Best Limited Series/TV Movie Actress and Best Limited Series as an executive producer. In the former category, she ranks third in our combined Emmy odds, trailing Michelle Williams (“Fosse/Verdon”) and Patricia Arquette (“Escape at Dannemora”), but ahead of Niecy Nash (“When They See Us”), Joey King (“The Act”) and Aunjanue Ellis (“When They See Us”). However, could we be underestimating Adams?

On the show, which ran from July to August last year, she played Camille Preaker, a troubled journalist who returns to her hometown of Wind Gap to investigate and report on two mysterious murders. After suffering a traumatic childhood at the hands of her cruel mother Adora (Patricia Clarkson), her feeling of worthlessness swiftly developed into self-hatred, sending her down a path of severe self-harm and alcoholism. The return to her disquieting, sinister hometown only forces her to confront past demons, and exposes secrets about her sister Marian’s (Lulu Wilson) death and her mother’s abuse.

Camille’s self-loathing triggers an internalization of all her feelings, specifically her rage, leading to her almost normalizing self-harm, whether that be through excessive alcohol consumption or the carving of words into her skin. As the series progresses, she becomes a rumbling volcano desperately waiting to erupt, forcing Adams to carry Camille’s rage on her back but mostly contain it. Even when she does unleash it, it’s not in a big, ostentatious way, but rather enclosed in subtler moments, like the rage-filled look she gives her mother in the finale (“Milk”), after she finds out that she was responsible for her sister’s death. And speaking of sister, Camille’s reaction to finding out that Amma (Eliza Scanlen) is Wind Gap’s killer — a combination of fear and heartbreak written on Adams’ face — is one easily remembered.

SEE All she does is win: Patricia Clarkson has never lost an Emmy and looks strong to keep it that way with ‘Sharp Objects’

What sets Adams apart from her co-nominees is that she’s the only one portraying a fictional character, one that demands incredibly subdued work from her. Yes, Emmy voters love flamboyant performances and when actors transform into real-life figures, even more so when they physically resemble them, but what happens when there are five performances as such in the running?  That’s when being the odd one out might help, because in the event of a vote-split, Adams could just rise to the top.

Plus, she’s already nabbed Critics’ Choice, Golden Globe and Screen Actors Guild Awards nominations for this role. Believe it or not, the fact that she’s only taken home the Critics’ Choice Award, in a tie with Arquette for “Dannemora,” might actually benefit her: It is now well known that she will go home nearly empty-handed for this role if she doesn’t reap that Best Limited Series/TV Movie Actress prize on Emmy night. And after falling to an ignominious 0-6 record at the Oscars following her loss for “Vice” earlier this year, voters might finally want to pay their respects to the overdue actress.

With eight overall noms, “Sharp Objects” fared well, but didn’t quite max out at the Emmys. It missed out in the pivotal writing and directing races, and was only able to land acting bids for Adams and supporting player Clarkson. It still made the Best Limited Series cut, which could allow Adams to cash in on two Emmys.