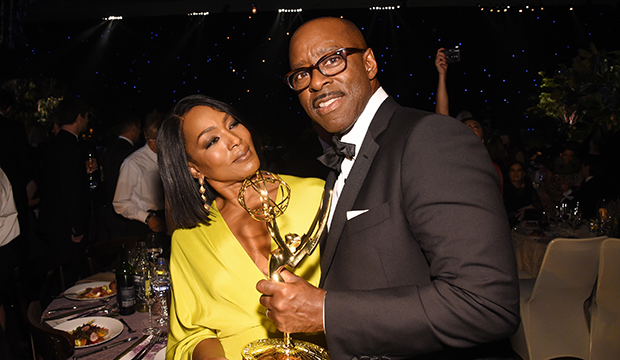 It might be hard to believe, but Angela Bassett has never won an Emmy before. She’s now her fifth nomination after making the Best Narrator lineup for her work on Nat Geo’s “The Flood.” If she prevails, not only will she get her first statuette, but she and husband Courtney B. Vance will join the club of Emmy-winning married couples.

Vance has a perfect record at the Emmys, converting his first nomination into a win in 2016 in Best Limited Series/TV Movie Actor for his performance as Johnnie Cochran on “The People v. O.J. Simpson: American Crime Story.” He gave a brief but memorable speech in which he dedicated the award to his wife of now nearly 22 years — or “the woman that rocks my chain.” #truelove

SEE Nat Geo Emmy FYC: Angela Bassett hopes this awe-inspiring performance of ‘The Flood’ score will make you ‘fall in love with the wild’ [WATCH]

Couples who’ve won performance Emmys before or during their marriage include:

Daniels and Bartlett, and Lunt and Fontanne are the only married couples to win acting Emmys on the same night for the same program. But Lunt’s and Fontanne’s victories were shared; that year, the academy gave multiple awards in just four categories (program, performing, directing and writing), and Lunt and Fontanne were two of the five performers (out of 16 nominees) to win.

If Bassett wants his-and-hers Emmys in the Bassett-Vance household, she’ll have to defeat reigning champ David Attenborough (“Our Planet”), Charles Dance (“Savage Kingdom”), Anthony Mendez (“Wonders of Mexico”), Liev Schreiber (“The Many Lives of Nick Buoniconti”) and Juliet Stevenson (“Queens of Mystery”). Previously, narrators competed under a single voiceover category alongside character voiceovers, but the TV academy split it into two categories in 2014 — Best Narrator and Best Character Voiceover Performance — to differentiate the two. Bassett would be the second woman, after Meryl Streep (“Five Came Back,” 2017), and second black narrator, after Keith David (“Jackie Robinson,” 2016),  to win since the category’s inception.