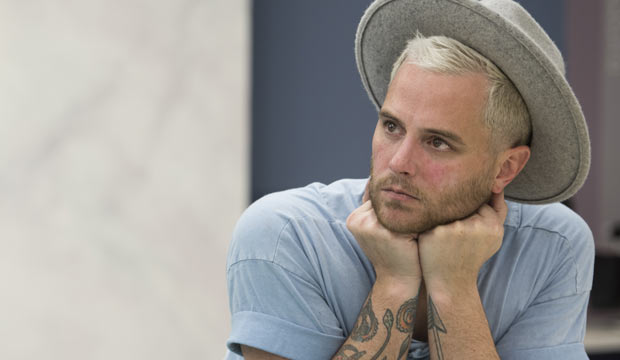 The judges on “Project Runway All Stars” sure are unforgiving. The two designers on the chopping block at the end of “Nina Says Don’t Cry Over Spilt Silk” were Anthony Ryan Auld and Michelle Lesniak, the only two designers who had won two previous design challenges (Lesniak just won her second last week). It was Auld who ended up exiting the competition after a challenge he tearfully struggled with, but I don’t think he really deserved to go. He was one of the best designers of the season, and maybe I’m in the minority but I thought he was one of the better designers of the night too. Do you agree? Scroll down to vote in our poll at the bottom of this post.

Auld’s heart wasn’t really in this week’s challenge, which was to design a gown for a royal ball with luxurious silk. Ball gowns aren’t his forte, and he was so overwhelmed by designer’s block that he was on the verge of tears while getting feedback from mentor Anne Fulenwider. With the show down to five designers and Auld in low spirits, it was an unusually somber workroom. But Auld ended up with an upbeat design: a white caftan dress with bright yellow details embellished with feathers.

Judge Georgina Chapman thought Auld had a “nice idea,” but that his use of colors was “sad.” Isaac Mizrahi said it made an “awkward first impression.” Guest judge Iris Apfel likes feathers but felt they were out of place on this particular look. However, Nina Garcia came to Auld’s defense. “I happened to like this dress,” she said. “This caftan seems very elegant to me.” Alyssa Milano liked the dress too, though she didn’t feel it was appropriate for a royal ball.

The irony is that Garcia liked Auld’s look more than any of the other judges, but he was eliminated even though it was her challenge — with her name in the episode title and everything. And I agreed with her. I thought it was flattering, visually impactful and made a bold statement on the runway — even the feathers worked for me. I’ve probably enjoyed Auld’s aesthetic more than any other designer this season, so even though he won two challenges, I thought he sometimes didn’t get his due. He would have easily made my final three, but alas, I don’t get a vote.

What did you think of Auld’s elimination? Did you like his feathers as much as I did, or did you agree with the judges that it was for the birds?