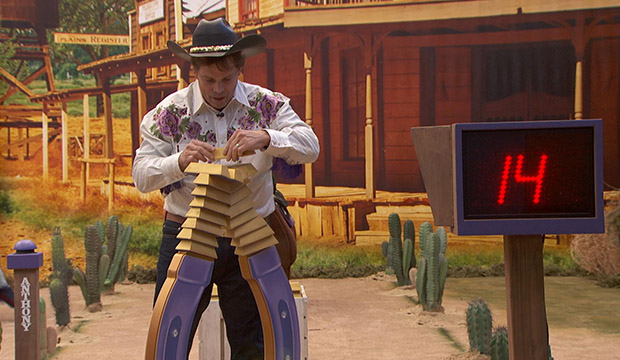 Anthony Scaramucci‘s early exit from “Celebrity Big Brother” was explained on Friday’s episode, when he was revealed to be a fake houseguest who left the game to give the nominees another chance to save themselves with a second Veto, aka Mooch’s Veto, that was all about the former White House communications director. But was this really a pre-planned twist or just an easy cover-up for, like, the Mooch quitting? But the man, the myth, the Mooch himself insists the twist was part of his contract from the beginning and all other speculation is indeed fake news.

SEE ‘Celebrity Big Brother’: How to vote for Power of the Publicist twist

In an interview with “ET Live,” Mooch shares that he initially rejected the offer to join the show because he wasn’t familiar with it. Undeterred, two CBS executives met with him following his appearance on “Real Time with Bill Maher” on Halloween to convince him. Part of that pitch included the twist of him leaving after six days.

SEE ‘Celebrity Big Brother’ recap: Who is the second HOH and who did they nominate for eviction?

Mooch says he didn’t know what the twist was until 15 minutes before his departure, when he was called in to record the “breaking news” alert explaining the twist and Mooch’s Veto to the house. “This show is incredibly unscripted and very free-forming, so I never got to know what this twist was until about 15 minutes before I walked out of that house. So I did that reporting and literally they whisked me out of the house out the back door,” he shares.

Once he was told of the twist, he thought it was a “really cool idea” because it gave the nominees on the block — Jonathan Bennett and Tom Green and renom Kandi Burruss, who took Mooch’s place — another chance to win the Veto. Before he was told, he thought the twist was him being a “sacrificial lamb” because of the living room setup. “When I walked into the house, and there were like two chairs there … and then we came back from the competition and then that couch was there, that loveseat, rather than the two purple chairs. So I was thinking, ‘OK, maybe I’m sort of like the sacrificial lamb here and the other people get a ‘get out of jail’ free card,'” he says. “So I didn’t necessarily think it was going to be another Veto or something like that.”

Mooch was already gone by the time the live feeds started on Tuesday night, which sent fans into a tizzy trying to figure out where in the world the Mooch was. He was actually in Switzerland at the time for a SkyBridge event and watched the live feeds from there. While he enjoyed the speculation over his exit, Mooch admits he was surprised at how many people thought he threw in the towel.

“Let’s face it, I’m probably one of the most famous firings of the last five years. I got thrown from the White House in 11 days. But I’m not a quitter,” he says. “When people were saying I’m a quitter, I was surprised by that. … I thought the speculation was fun, but to be truthful, I’m super glad it came out as to what happened so people know I’m definitely not a quitter, but it was a twist. I wanted to be part of that you have to expect the unexpected about this show.”

He does understand why the conspiracy theories exist, since neither the show nor Julie Chen Moonves ever teased any aspect of a twist relating to the Mooch. The only thing we got was the voiceover guy saying, “A shocking new twist will send a second celebrity packing” on Wednesday’s episode, a day after the whole world knew Mooch was already gone. “They asked me to keep it confidential, so they wanted there to be that level of suspense on both sides,” he says. “I have to tell you, the CBS publicity team was amazing on this. Great coordination, great teamwork. Because we were able to keep the thing airtight that there was a twist. Obviously I didn’t know what the twist was going to be, so that was like super airtight.”

Though he had an “amazing time” and his competitive side wants to go back, Mooch says he never thought about trying to get out of the twist to stay in the house. “I had an agreement with them and I had a handshake with them that that was going to be the direction that we were going in,” he says. “What was interesting was … the last night that I had in the house, I did not sleep because I was like, ‘What’s going to happen? How is this going to play out?’ and so forth. Sometimes they pop the lights on in the house and they play super loud music in the morning. I was already up, so I wasn’t jarred by that.”

This is all a very plausible explanation. TPTB wanted the Mooch so badly, they compromised with a six-day stay. Plus, his trip to and event in Switzerland had to have been scheduled in advance, so he had to have known he would be out of the house by that time.

Still, the twist itself felt very cobbled together at the last minute. There’s still no great explanation why the twist was never teased as the show has always done, which only adds fuel to the quitting fire. It could very well be that producers were so happy to book the Mooch under a short contract in the fall that they put off actually coming up with a twist until they had to. Was the twist predicated on Mooch being a nominee? Would they have done something different if he hadn’t been a nominee? Possible exchange:

Producer 1: Oh, damn, Mooch is supposed to leave tomorrow. How are we going to explain it?

Producer 2: Hmm, what would make sense?

Producer 1: He was fired.

Producer 2: Stop it. Seriously, what are we going to do?

Producer 1: Well, we can say he wasn’t a houseguest. And since he’s a nominee, why don’t we have Ryan name a replacement and then do another Veto to be fair to that person? Two Vetos in a week.

Producer 2: Oooh, we can make the Veto about Mooch.

Producer 1: Yes! How though? We don’t have a lot of time.

Producer 2: Hmm, we could test them on their memory of things he said. Put them on newspapers. Fake news.

Producer 1: Genius! Get a P.A. ASAP to pull some quotes and go to Kinko’s and blow them up.

Yup, that’s definitely how it went down.