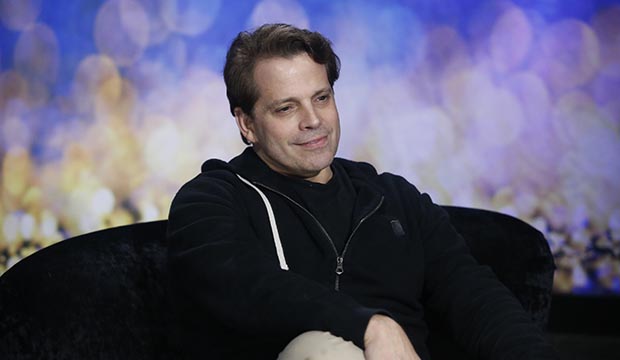 Yes, the Mooch has left the house. Anthony Scaramucci departed “Celebrity Big Brother” after six days, four days short of his notorious 10-day stint as the White House communications director. But he won’t say why yet. He did, however, reveal when you’ll find out.

At a SkyBridge Q&A in Davos, Switzerland, on Wednesday, the Mooch told the crowd, as captured by TMZ (watch below), “You have to tune in on Friday to understand what happened. Unfortunately, I signed a confidentiality [agreement], but there’s a little bit of a cliffhanger.”

Calling it a once-in-a-lifetime opportunity, the Mooch said he had a “tremendous amount of fun” in his brief time on the show and explained why he joined. “There’s a lot of hoity-toity intellectuals that are like, ‘WTF, what’s he doing on ‘Big Brother’?’ But you have to remember I grew up in a blue collar family,” he said. “America watches these shows. You don’t want to unplug yourself totally from America.”

The Mooch’s departure was revealed when the live feeds started Tuesday night, but it was unclear, even to the remaining houseguests, if he quit or if he was part of a twist. A conversation between Lolo Jones and Natalie Eva Marie implied that the Mooch, who was one of HOH Ryan Lochte‘s nominees, wasn’t a real player and left after that was revealed — and after the Veto was played and won by Ricky Williams — but it could’ve been pure speculation. In turn, a replacement nominee, Kandi Burruss, was named and a second Veto was played and won by Kato Kaelin.

If the Mooch was part of a twist, it might explain why he was able to show up to the SkyBridge event on short notice if it were pre-planned. (TMZ calls it a “surprise appearance,” which, obviously, since everyone thought he was still inside the house.) And his tease of his exit being a “little bit of a cliffhanger” suggests that there is way more to the story… like, will he come back?

Still, such a short twist is a bit of a head-scratcher. You’d think TPTB would want to milk it for as long as they could, especially since any sort of twist involving him hasn’t even been teased by Julie Chen Moonves on the broadcasts yet.

Who knows, maybe the answer is super boring and he did just wanted to quit. Friday’s episode airs at 8/7c on CBS.