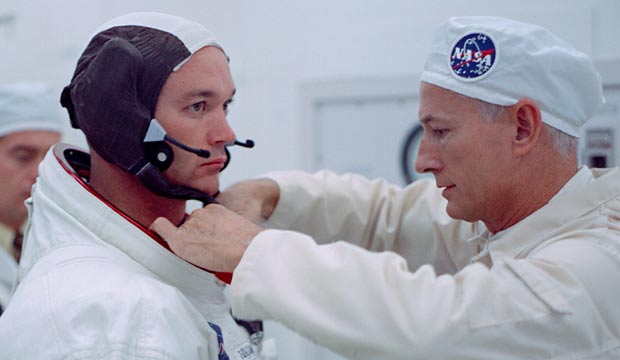 The year 2019 is barely two months old, but have we already been treated to a potential Oscar winner for 2020? Just a few months after Damien Chazelle‘s “First Man” dramatized Neil Armstrong‘s historic voyage to the moon, the documentary “Apollo 11” explores the same mission using newly discovered 65mm footage that shows us the event from the point of view of the astronauts, the Mission Control team and the spectators on the ground. And it’s already one of the most critically acclaimed films of the year.

As of this writing the film has a MetaCritic score of 89 based on 20 reviews — all positive. That score makes it the second highest rated film of the year so far, behind only “The Souvenir,” which comes out later this year, but has a 95 score based on rave reviews out of the Sundance Film Festival in January. “Apollo 11” also has 100% freshness on Rotten Tomatoes after 40 reviews counted so far. To compare, only one of this year’s Oscar nominees for Best Documentary Feature had higher critical ratings: “Minding the Gap.”

“Apollo 11” also screened this year at the Sundance Film Festival, where it was awarded for its editing, though it lost the Grand Jury Prize for documentaries to “One Child Nation.” It’s directed by Todd Douglas Miller, whose previous film “Dinosaur 13” (2014) was about the largest Tyrannosaurus Rex fossil ever found; it also screened at Sundance, and it won Miller a News and Documentary Emmy for Best Science and Technology Programming. Is Oscar next for the nonfiction filmmaker? Check out some of the reviews below, and discuss this and more with your fellow movie fans in our forums.

Kimber Myers (The Playlist): “‘Apollo 11’ needs not to gild the lily of the lunar mission with interviews, narration or impressive graphics; instead, Miller relies almost entirely on archival footage and audio to share a previously unseen look at that momentous endeavor. And it is absolutely jaw-dropping … Seeing ‘Apollo 11’ on the biggest screen possible is a transformative experience”

Adrian Horton (The Guardian): “I wasn’t sure if I was watching footage from 1969 or a Nasa promo shot from last year. That present-ness is one of the film’s major feats, credit due to director Todd Douglas Miller, who has found a brilliant way to portray the first moon landing by doing nothing more than the gargantuan task of faithfully rejuvenating the historical record. The documentary is seamless curation of archival work.”

Glenn Kenny (The New York Times): “The documentary ‘Apollo 11,’ directed and edited by Todd Douglas Miller, is entirely awe-inspiring. Which is something of a surprise. As world events of the 20th century go, Apollo 11, the NASA mission of 1969 that put two men on the moon, has been thoroughly documented … The movie generates and maintains suspense. And it rekindles a crazy sense of wonder at, among other things, what one can do practically with trigonometry.”

David Ehrlich (IndieWire): “A growing number of generations can’t access the true awe of the launch, or appreciate how that one giant leap for all mankind made the dreams of an entire planet seem possible. There are passages — utterly astonishing passages — of Todd Douglas Miller’s ‘Apollo 11’ that might change that forever; change that for the people who were alive to watch history being made on their fuzzy television sets, and for their millennial children who were born two or three decades later, and for anyone who comes after us.”