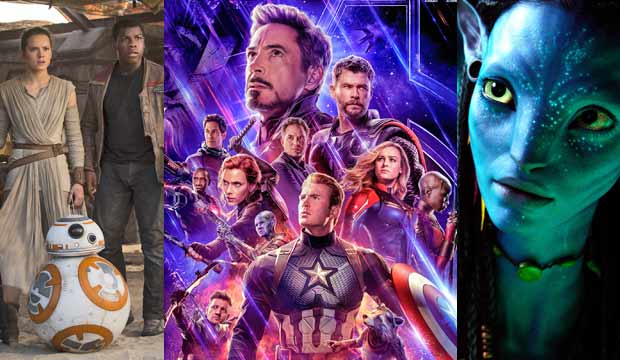 “Avengers: Endgame” broke every opening weekend box office record in the book. That wasn’t a surprise. But it did it by an even wider margin than expected. Many wondered if the film could crack $300 million domestic, but it made $350 million. And we wondered if it could make $1 billion worldwide, but it made $1.2 billion. After a few days it’s already one of the 20 highest grossing films of all time. But can it get to number-one here both and abroad? “Avatar” and “Star Wars: The Force Awakens” need to watch their backs.

2015’s “The Force Awakens” was the triumphant comeback for the “Star Wars” franchise, the first after George Lucas sold the rights to Disney (which also owns the Marvel franchise), and it debuted with an astronomical $247 million domestically. At the time that was the record for the biggest opening weekend of all time, and it had long legs thanks to strong reviews and positive word of mouth. It ended up with a domestic total of $936 million, shattering “Avatar’s” record by almost $200 million. And even though last year’s “Avengers: Infinity War” broke “Force’s” opening weekend record, it topped off at $678 million domestically, so “Force Awakens” remains the movie to beat for the top spot on these shores (not accounting for inflation).

But “Avatar” owns the international record. The 2009 sci-fi extravaganza made $2.78 billion worldwide, and it’s the only movie to date that has ever earned more than $2 billion overseas alone. Another James Cameron epic, 1997’s “Titanic,” holds the number-two spot at the worldwide box office ($2.18 billion). “The Force Awakens” is third ($2.06 billion), and “Infinity War” is fourth ($2.04 billion). Those are the only four movies that have ever crossed the $2 billion mark worldwide.

So after its unprecedented $1.2 billion global opening, the question is how long will “Avengers” reign? It has an A+ CinemaScore rating based on opening night audience reactions. When you combine that with the film’s strong reviews, the word of mouth should be strong, and its fandom is so passionate the film could enjoy a lot of repeat business just like “Titanic” did. For that matter, there are likely lots of fans who couldn’t even get a ticket for “Endgame” in its opening weekend, which alone should keep its numbers astronomically high again next week.

What do you think? Will “Endgame” break the “Force Awakens” and “Avatar” records? Or maybe one record, but not the other? Vote in our poll below.