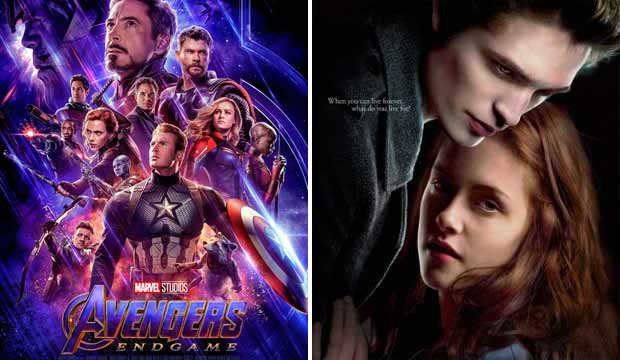 The 2019 MTV Movie and TV Award nominations were announced on May 14 with “Avengers: Endgame” leading the way with four bids, tied with TV’s “Game of Thrones” and the documentary “RBG.” Now you can predict the winners in all 16 categories here in our predictions center. If “Endgame” wins Best Movie it would be the third film from the Marvel Cinematic Universe to take top honors, but even then it wouldn’t be the most awarded franchise in history. That honor would still belong to “Twilight.”

These awards are decided by fans voting for the winners online, so franchises with especially passionate fan bases tend to dominate. “The Lord of the Rings” won Best Movie for all three of its installments: “The Fellowship of the Ring” at the 2002 awards, “The Two Towers” in 2003 and “The Return of the King” in 2004. Then the “Twilight” movies won four times in a row: for the original in 2009, “New Moon” in 2010, “Eclipse” in 2011 and “Breaking Dawn, Part 1” in 2012. “Breaking Dawn, Part 2” wasn’t even nominated for the top prize in 2013, perhaps because the powers that be at MTV sensed it would just steamroll over the competition again.

So 2013 ended up being the first year an MCU movie won. The first “Avengers” movie claimed three awards out of its six nominations: Best Movie, Best Villain (Tom Hiddleston) and Best Fight (for the climactic battle in New York). The next MCU movie to earn a nom in the top race was “Guardians of the Galaxy” in 2015, but it lost to the teen romance “The Fault in Our Stars.” Then in 2016 “Avengers: Age of Ultron” was nominated, but lost to “Star Wars: The Force Awakens.”

Finally, in 2018 two MCU movies were nominated: “Avengers: Infinity War” and “Black Panther.” That could have been a recipe for vote-splitting that would have cost both films the prize, but “Panther” ended up with the Golden Popcorn. It claimed four awards total that night: Best Movie, Best Performance in a Movie (Chadwick Boseman), Best Hero (also Boseman) and Best Villain (Michael B. Jordan).

The mixed results for Marvel movies in the past suggest that a victory this year isn’t set in stone, though the fact that it’s the most recent film in the top category and is already the second highest grossing movie in the world might make it tough to beat. Nevertheless, the same demographic of fans that voted for “Twilight” and “The Fault in Our Stars” in recent years might be drawn to Netflix’s teen rom-com “To All the Boys I’ve Loved Before,” and Jordan Peele‘s critically acclaimed horror blockbuster “Us” could also draw significant support.

And let’s not the forget passionate enthusiasm critics and audiences had for another superhero film in the running, “Spider-Man: Into the Spider-Verse.” Rounding out the category is “BlacKkKlansman,” but Oscar movies don’t tend to win at these awards unless they’re massive blockbusters like “Titanic,” “Gladiator” and the aforementioned “Lord of the Rings” movies. Do you think “Endgame” has it in the bag, or will one of its rivals snap it out of contention.