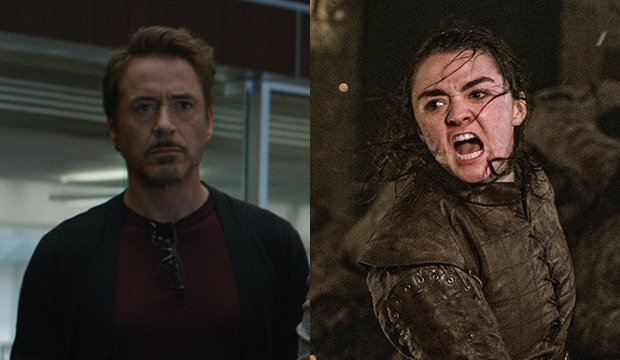 WARNING: The following story contains spoilers about “Avengers: Endgame” and the third episode, “The Long Night,” of “Game of Thrones” Season 8. Read at your own risk.

You have to feel like HBO deliberately scheduled the eighth and final season of “Game of Thrones” to debut on April 14. Sure, outside of a March 31 premiere for Season 3 and the Season 7 drop on July 16, April is usually “Thrones” territory. But HBO could’ve scheduled it a week earlier or a week later; it didn’t though. And because it didn’t, the third episode, “The Long Night,” which was just the dreaded Battle of Winterfell against the Night King, aired Sunday, April 28 — the same weekend that another epic, long-gestating showdown absolutely obliterated the box office: the Avengers vs. Thanos (Josh Brolin) in “Avengers: Endgame,” which opened Friday, April 26. Two absolutely pop culture-seizing behemoths each featuring a years-in-the-making battle against a fearsome villain and a protagonist named Stark who saves the day. But which Stark was the more heroic one?

“Avengers: Endgame” and Sunday’s episode of “Game of Thrones” have a lot in common, of course, but one big difference is that the former is the punctuation on an unprecedented, interconnected 22-film series that began with 2008’s “Iron Man.” “Game of Thrones” still has three episodes left before its own endgame that may or may not involve Cersei (Lena Headey) and a pirate doing Joshua Jackson cosplay. As most people who’ve seen “Endgame” would tell you, the three-hour film, which really didn’t feel that long unless you have an overactive bladder, brought the Infinity Saga to a cathartic, emotional and satisfying close — and a lot of that has to do with Tony Stark (Robert Downey Jr.).

SEE ‘Game of Thrones’ vs. ‘Avengers: Endgame’: Which epic battle was better?

The culmination of this was the final act, when all the un-dusted Avengers/Guardians (Guardvengers?) line up in formation to take down Thanos and his minions, and we finally hear Captain America (Chris Evans) say those long-awaited, spine-tingling words: “Avengers… assemble!” The enormous set piece is dynamic, funny (props to Tom Holland, who remains the best Spider-Man), gives everyone their little moment — including all the lady Avengers together — and most importantly, visible (this is important later).

Its triumphant moment is bittersweet. Pulling a fast one on Thanos, Tony lifts the Infinity Stones onto his Stark Gauntlet and snaps the big purple goon away after uttering the same thing he said at the end of “Iron Man”: “I am Iron Man.” But he couldn’t withstand the power of the Stones and dies after Pepper/Rescue (Gwyneth Paltrow) tells him that she and their daughter Morgan will be OK and he can rest — a callback to earlier in the film when she asks him if he could rest if he went to bed and didn’t use his newly discovered time travel knowledge to try to bring back the dusted.

He wasn’t the only OG 6 Avenger who died, as Natasha/Black Widow (Scarlett Johansson) sacrificed herself for the Soul Stone earlier. But despite all the speculation that Cap would die battling Thanos, in so many ways, it had to be Tony. The Marvel Cinematic Universe started with Iron Man and this chapter — the MCU as we know it — had to end with him. “Part of the journey is the end,” Tony says in a pre-recorded message. And Tony’s journey was complete, going from a selfish billionaire industrialist to a selfless hero giving his life for the world.

Conversely, the victory over the Night King on “Game of Thrones” is purely built on adrenaline and exultation. Another Stark — Arya (Maisie Williams) — does the deed and survives (#nottoday), switching hands better than Michael Jordan to stab the literal ice-cold baddie in the gut with her dagger. It’s a total “F— YEAH!” moment, and you feel kind of dumb for not realizing until afterward that, like Tony vs. Thanos, it had to be Arya to kill the Night King. She has been training to kick ass and save Winterfell her whole life, and her own journey is also complete, even if the “Game of Thrones” story isn’t yet and she may have more killer moments (no pun intended) to come.

But the one thing that makes you go “huh?” about this big moment is, well, where the hell did Arya come from?! Bran (Isaac Hempstead Wright) looked to be the Night King’s next casualty when all of the sudden Arya jumps the Night King out of nowhere. How the hell did she get past all those White Walkers? Is this something we’re going to overlook because the stabbing was so badass? Because we shouldn’t. It also didn’t help that the installment was 82 minutes long and too dark even after TV brightness adjustment. Yes, we know it sounds insane to say that a three-hour film didn’t feel long and complain that an 82-minute episode did, but it’s all relative. Lengthy runtimes don’t really matter if you use the time and tell your story well (plus the final “Endgame” battle was not the entire three-hour movie), but the entire Battle of Winterfell was as dark and blurry as “Ozark” is blue, which made the quick cuts even worse and more disorienting.

You see them now?! @GameOfThrones pic.twitter.com/pYYOe9OZRH

But maybe that was “Game of Thrones”‘ plan all along: make the night so dark and full of terrors that you literally couldn’t see Arya’s heroic moment coming — unlike Dr. Strange (Benedict Cumberbatch), who saw Tony’s.