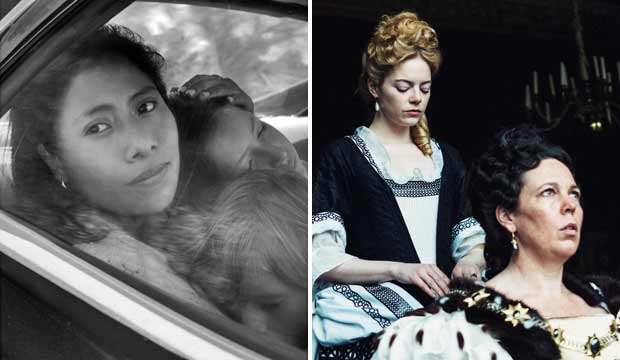 “The Favourite” is the most nominated film at the BAFTAs with 12 bids. And it’s full of British actors telling the (sort of) true story of a British monarch: Queen Anne (played by Olivia Colman). Surely the British academy will give it Best Picture, right? That’s what our racetrack odds say, but I think we’d be foolish to underestimate “Roma.”

That’s why I think we should be careful not to overestimate the home field advantage for a film like “The Favourite.” It’s true that this might be its best shot at Best Picture glory, but we’ve already seen this season how having a slew of nominations isn’t necessarily a decisive advantage for the film. At the Golden Globes it was tied with “Green Book” as the second most nominated comedy/musical behind “Vice,” but it was “Green Book” that won the top prize. “The Favourite” also led the Critics’ Choice nominations but came away with only a pair of prizes for its acting ensemble and for Colman’s comedic performance.

The lavish production values of the 18th century-set film have helped it rack up high nominations totals, including at the BAFTAs, but those may not translate to being the voters’ absolute favorite film. That keeps the door open for “Roma,” which has seven BAFTA nominations and has generated lots of momentum since the nominations were announced, tying “The Favourite” as the top nominee at the Oscars and winning the Directors Guild Award for Alfonso Cuaron. As of this writing “Roma” is the Oscar front-runner for Best Picture, so that wave of enthusiasm could cross all the way to the other end of the Atlantic.

There are currently five Expert journalists predicting “The Favourite” will win at the BAFTAs, but two are betting on a “Roma” upset: Bonnie Fuller (Hollywood Life) and Peter Travers (Rolling Stone). “Roma” also has support from 11 of our Top 24 Users who got the highest scores predicting last year’s BAFTA winners, and by 9 of our All-Star Top 24 who got the highest scores when you combine the last two years’ BAFTA results. Could a surge of support carry “Roma” to an upset victory, or is our consensus right that “The Favourite” will be just that?